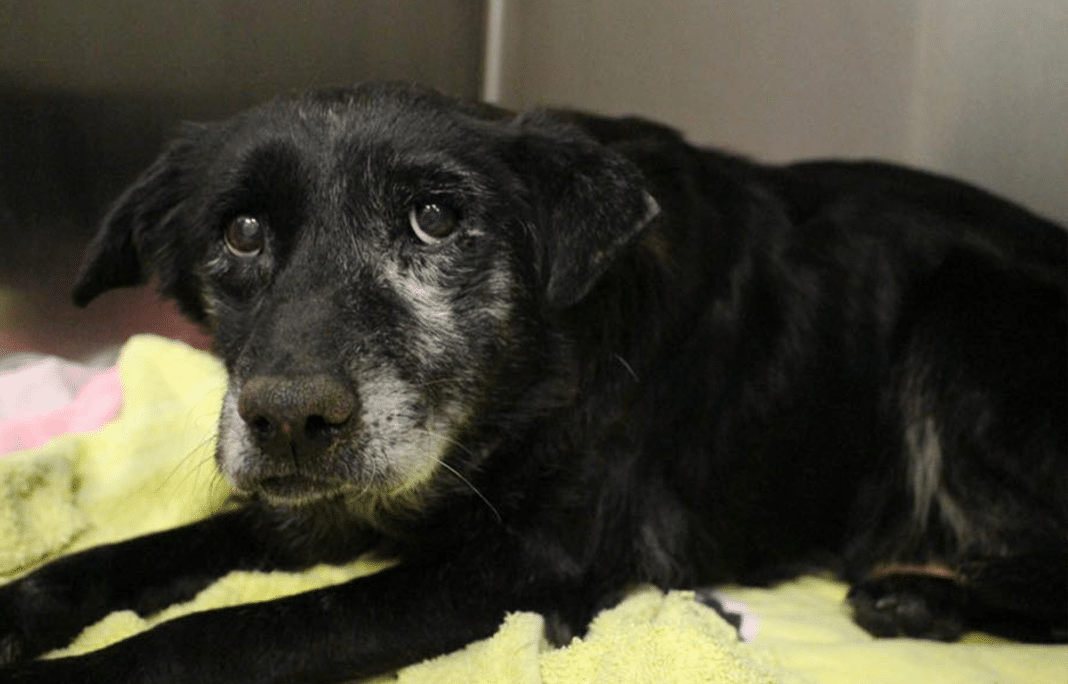 A senior dog named Peanut was turned into a shelter right after Thanksgiving Day with a request that she be euthanized. She was 14-years-old, severely underweight, had only two teeth, and was heartworm positive. Rather than treat her health issues, her family abandoned her to die. Unfortunately, Peanut’s story isn’t uncommon, as shelters see a rise in pets abandoned by their families around the holidays. Discarded like inconvenient burdens, many of these pets don’t get a second chance at life.

Peanut’s story is different thanks to a kind man named Tommy Bull from Crowley, Texas. Bull came across her story on social media after animal lovers and rescue groups began discussing how they could find Peanut a home before it was too late. In her pictures, she looked defeated, confused, and exhausted. However, the dog’s story so touched Bull that he knew he had to respond.

If he didn’t respond, chances were no one would. She had two strikes against her since she was older and had health issues.

According to the Dodo:

“I looked at her eyes and she looked like she had given up,” Bull told The Dodo. “She was a black dog, a senior, and heartworm positive; she had little chance of getting saved. The holidays are one of the worst times of the year for dogs, a lot of people turn them in to shelters.”

A fellow animal lover at a rescue group posted the happy news on Facebook, explaining that Bull finished up his workday and drove for hours in heavy Texas traffic to rescue Peanut from Dallas Animal Services. Peanut would get a second chance and new name: Ettie, short for Henrietta.

Ettie got a new family and name for Christmas this year.

Camo dog on the ‘Dodo’ thanks to foster / adopter dad Tommy Bull who has a huge heart for the seniors ???

When Bull arrived at the shelter, his first thought was making sure that Peanut knew she was safe.

“The workers carried her out to me because she was a little wobbly,” he said. “I grabbed her and I hugged her closely. I wanted her to know she was safe.”

Bull was immediately in love with his new pet, who he would adopt soon after meeting her.

“I fell in love with her instantly.”

In the safety of a new loving home, Ettie joined Bull’s other rescue dogs, where she quickly adapted. She received treatment for her health concerns and started to gain weight. Her personality started to blossom and shine through and the dark days were over.

Ettie’s story has touched animal lovers on social media. Many people have commented on how horrible it is for a family to abandon and neglect their pet in such a heartless way. All agree that Bull’s immediate efforts to save her are truly wonderful.

“Breaks my heart the way people treat senior dogs. God bless her! At least now she has a wonderful life with someone who truly loves her!”

Another person recognized how wonderful Bull’s actions were.

“I love that the first thing that he did when he got her was to hug her, to show her that she had love and was safe. What a wonderful thing to do for that dog. Thank you for taking her home.”

Now Ettie has become one of the family and will live out her final days offering love and affection. Senior pets offer just as much love as any young puppy or kitten. If you’re looking for a pet, don’t rule out an older pet. They might be the perfect companions, rewarding you many times over for the kindness you show them in the final years of their lives.

To learn more or to donate to the efforts to save dogs on euthanasia lists at high kill shelters, visit CAMO rescue, the group that helped arrange Ettie’s rescue.