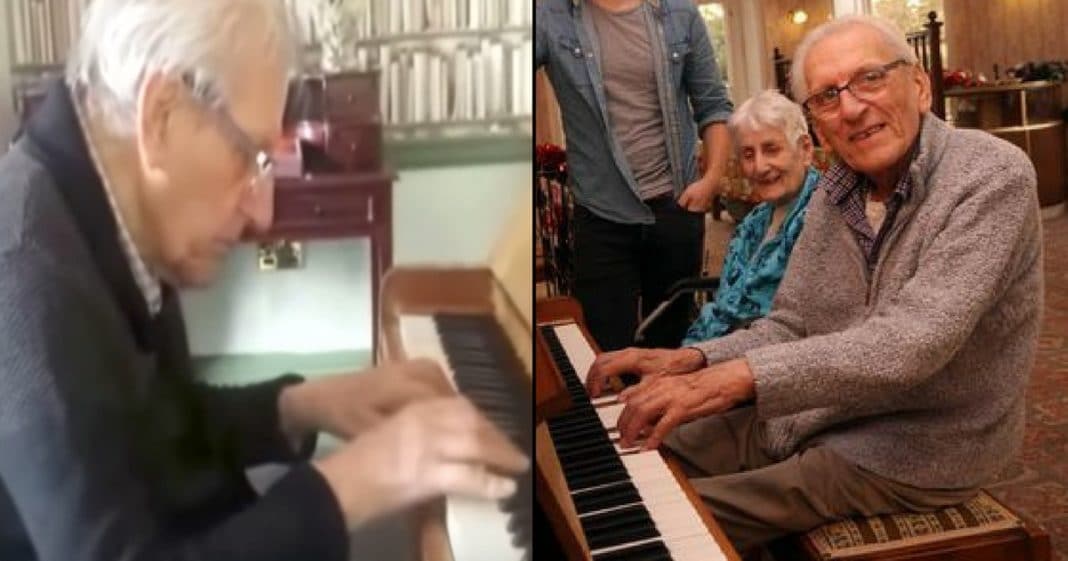 Nothing brings a couple closer together like having their own song, movie, or restaurant. These things take the relationship or marriage to a new level of sentiment and intimacy that creates a deeper bond for both involved.

While some of us have had the pleasure of sharing a special tune with a loved one, not all of us can say that we’ve had a loved one perform our favorite song for us.

There is one person who can though, and her name is Betty Hardy.

In a video posted on September 22, 2017, 94-year-old World War II veteran Edward Hardy serenades his wife, Betty, creating a moment that I am sure she will never forget.

After returning from World War II, Edward started a band called “The Sam Hardy Trio” in which he played the piano. Sadly, many years after his homecoming, Mr. Hardy was diagnosed with dementia. As a result of his diagnosis, Edward did not play the piano for nearly 25 years.

However, after sitting down at a piano at the assisted living facility where he and Betty live, he was able to not only remember, but play his wife her special song.

Betty sat behind her husband, to whom she has been married since her teenage years, listening to every note as Edward’s hands tapped and moved across the piano without missing a beat. It was as if he had been practicing the song for years.

In the midst of his daily struggle with recollecting things big and small, by a beautiful twist of fate he was somehow able to perfectly recall her song, and it sounded delightful as he played it.

The video below shows Edward playing the song as well as photos from his younger days, before the war and post-war while he had his band. It is so sweet to watch and wonderful to hear. The love in this video is sure to warm the heart of anyone who watches it.

Did this video make you smile? So share this!