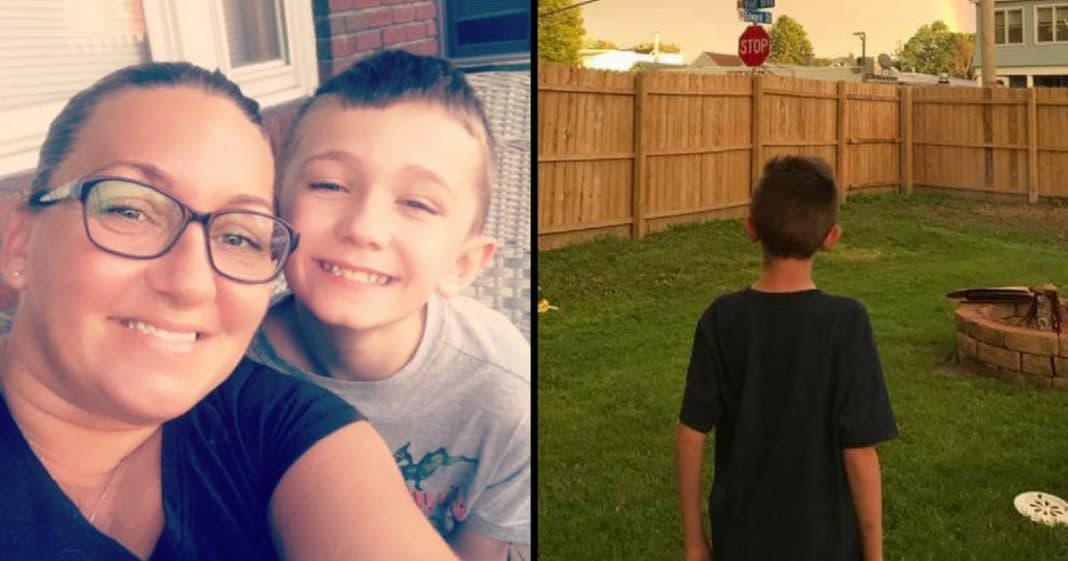 Explaining death and loss to a child with special needs can be hard. They don’t see or understand things the same way children without disabilities do. Such is the case with 9-year-old Robbie Ecuyer, who has autism. Robbie lost both his parents within three weeks of each other, but the way the little boy is managing his loss is astonishing.

Robbie now lives with his aunt, Crystal Skawinski. The little boy’s mother died in May of this year from cystic fibrosis. To help his son grieve the loss of his mother, Robbie’s father told him that his mother “went over the rainbow bridge.”

Incredibly, a double rainbow appeared in the sky over Robbie’s school on the day his mom died. A family member managed to snap the photo and the picture means a great deal to Robbie.

“Robbie’s father is the one who explained the rainbow bridge to him. That’s why the image meant so much when that happened,” Skawinski said.

Shortly after the loss of Robbie’s mother, the little boy suffered another tragic and devastating death – his father died of a drug overdose. Losing one parent was traumatizing enough, but both parents within three weeks of each other? How would Robbie handle it?

To help her nephew cope with yet another death, Skawinski took to Facebook. She asked friends, family, and followers to send Robbie pictures of rainbows – images of many colors splashed together to represent his father looking down on him.

The post has since gone viral, spreading the need for rainbows to all corners of the globe. Over 5,000 people have shared it, and 6,000 have answered the request for pictures of rainbows.

“Robbie touched the hearts of a lot of people out there,” Skawinski said. “It’s been a lot easier because we have something to be able to talk about rather than [what] happened. It gives him a way to explain it to himself, and when he wants to talk about it, we talk about rainbows.”

Robbie’s aunt is so grateful for all the responses because they’ve helped Robbie so much. “It’s been amazing. To know that one little boy just melted hearts is crazy to think about. It’s crazy to see all these different rainbows,” Skawinski said.

Who knew that seeing rainbows could allow a little boy with special needs to grieve the terrible loss of his parents. It’s the simplest things that can bring the most comfort.

Were you touched by the way so many stepped up to help comfort Robbie during this terrible time? So share this!