9-Yr-Old Asks For Toys For B-Day, But What She Does With Them Is The Real Story 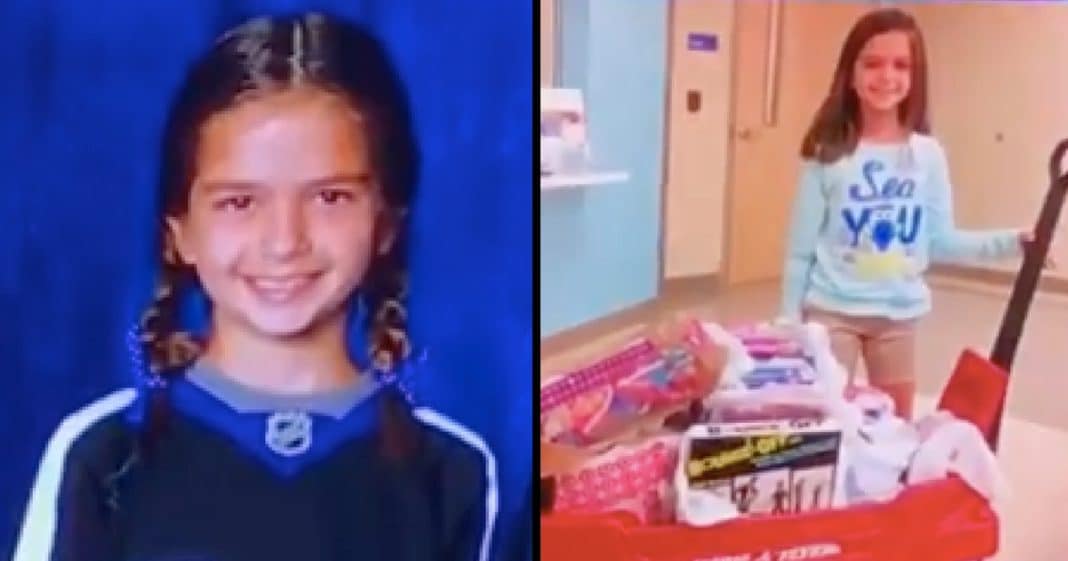 Since she was six months old, nine-year-old Addison Kapustiak has been hospitalized numerous times. Before the age of two, she underwent three complicated brain surgeries.

Addison suffers from Tumor Necrosis Factor Receptor Associated Periodic Syndrome (TRAPS), a rare genetic disease. TRAPS affects all patients differently, but depending on its severity it can result in frequent fevers; pain in the chest, stomach, and muscles that move the arms and legs; swollen red eyes; and red and painful rashes that also transfer to the limbs. In many cases, these symptoms can last for over a week.

To manage her fevers, Addison must receive infusions of steroids and other anti-inflammatory medications every other week. But despite these severe and recurring treatments, the little girl doesn’t let her ill health affect her spirit. She’s found a way to keep smiling while receiving care at Johns Hopkins All Children’s Hospital in Florida.

Because she’s a regular there, Addison looks forward to choosing a toy from the toy closet after every successful treatment, and she knows how other kids must feel when they too can go home with a new toy and their health. As Addison’s mom, Alice, said, “To be finished with their treatment and to get to go pick a  prize…it makes them smile.”

After one treatment, though, Addison saw that the toy closet was running low. All that was left was “just Happy Meal toys and stuff. Like, baby toys and stuff that I don’t like,” she said.

She wanted to help – she couldn’t let other kids like her go home empty-handed. That’s when Addison had an excellent idea: For her ninth birthday, she asked for donations to the toy closet instead of toys for herself. “It made me feel awesome to make kids feel happy,” she said.

Addison will continue to give smiles to children through the nonprofit she’s started. Sending Smiles collects toys and donations for the toy closet at Johns Hopkins All Children’s Hospital, as well as other hospitals. This past Christmas, Addison delivered four carloads of toys for the closet.

As a result of her becoming a Lightning Community Hero of Tomorrow, Addison was given a donation of $50,000. Half is for her college tuition, and the other $25,000 will go to Sending Smiles.

Jeff Vinik, owner of the Tampa Bay Lightning, and his wife, Penny, started the Lightning Community Hero program during the 2011-12 season. They committed to donating $10 million over the course of five seasons to the greater Tampa Bay community. So far, the foundation has granted $13.55 million. In 2016, the Vinik’s announced the Foundation’s renewed commitment to donate $10 million for the next five years!

Addison is such a smart and compassionate girl! She took her own experiences and, instead of feeling sorry for herself, decided to help others. Her kindness will continue to pay off in the most important ways that matter.

Were you touched and impressed by Addison’s kindness and compassion toward other sick kids? So share this!