89-Yr-Old Says He’s ‘Dying Of Boredom.’ What Happens Next Leaves Him Speechless 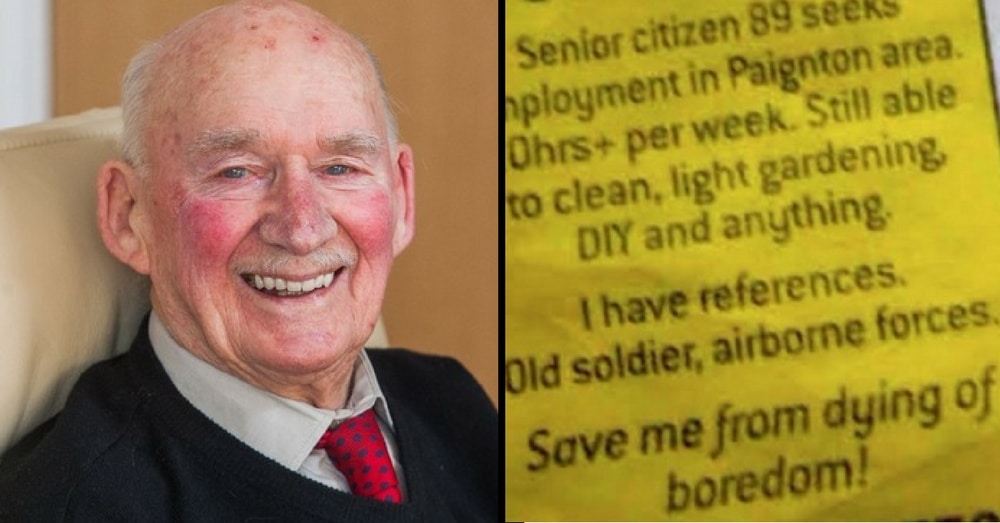 Joe Bartley has had quite the life! The 89-year-old veteran served as a signalman for the Royal Signals of the 6th Airborne Division and worked as a wireless operator in Palestine from 1946 to 1948.

He left the army after that, but rejoined in 1958 to serve under the Royal Electrical Mechanical Engineers. He worked as a sign writer and coach painter in France and Germany until ending his military service in 1966.

Later on he met his wife, Cassie, and was married to her for 35 years.

Sadly, Cassie passed away last year, and the once-active soldier was left alone and lonely.

Tired of whittling the days away, Joe decided to put an ad in his local newspaper to see if he could find some work to do:

“Save me from dying of boredom!”

Joe wasn’t sure what would come from the ad, but just days later he received a job offer from a local cafe.

“Someone phoned me today from the Cantina Cafe in Paignton and said they might have something for me,” he said. “I am going to see them on Thursday and told them I can clean tables or work in the kitchen.”

Joe said he doesn’t care that he’ll be doing menial work – he just wants to get back out there and do something. Taking this job, he said, would help him “feel more like Joe.”

“Now I don’t feel like Joe because I’ve got to depend on the council for rent and everything else,” he said. “You see, when you’re working for yourself you’re more or less self-contained. I don’t know how to explain it any better really, you feel more individual and you’re meeting people – you know, making friends.”

Joe said he has received other offers to do some handyman work and other odd jobs, but has turned them down because he was looking for something “a little more permanent.”

Are you amazed to see this 89-year-old getting back out there and going back to work? So share this!