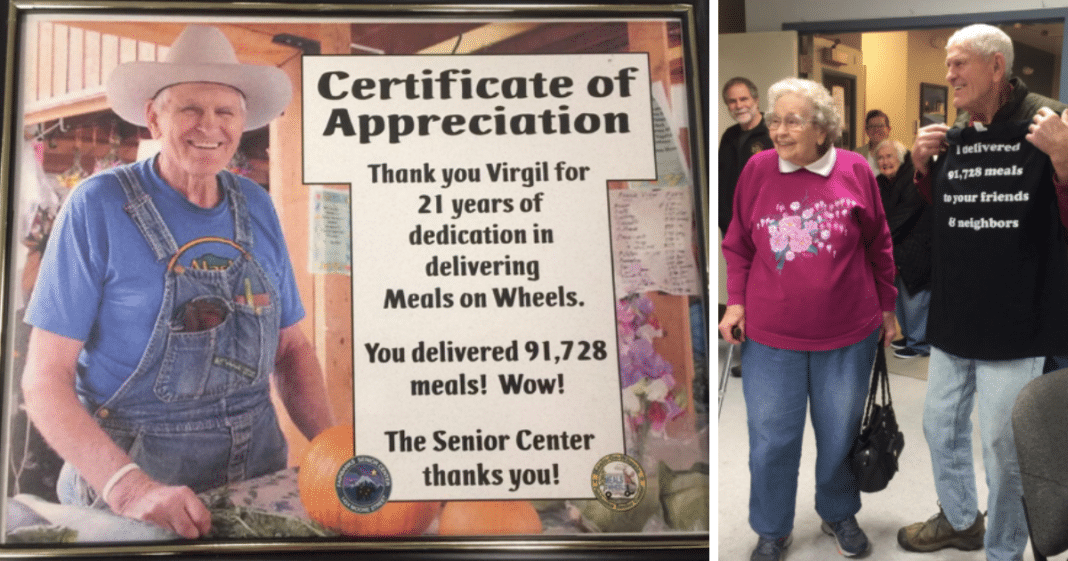 Every Monday for 21 years in the town of Fairbanks, Alaska, Meals on Wheels volunteer Virgil Severns would load up his four-wheel-drive vehicle at the Fairbanks Senior Center and spent half the day delivering meals to local residents who were housebound.

The 89-year-old decided it was finally time to retire from his volunteer job. The final tally? He delivered 91,728 meals.

“I’ve enjoyed it,” he said. “It was a challenge sometimes.”

His route was a rigorous one. Often delivering meals to residents in whose homes were in outlying areas, many with unplowed roads and unshoveled walkways in the winter. But he only recalls getting stuck once, when he couldn’t get out himself — and that was just last year.

Meals on Wheels is the Fairbanks Senior Center program that provides meals for people age 60 and older who are unable to leave their homes. Volunteers deliver a week’s worth of frozen meals at one time.

Every Monday, Mr. Severns put nearly 100 miles on his vehicle as he delivered meals to 13 or 14 homes in far-reaching neighborhoods.

At one point, after he retired from teaching at a local high school, he and his wife Anne moved back to Norton, Kansas. There, Severns volunteered with a similar program that delivered meals to people who were homebound.

When they returned to Alaska in 1997, he decided to continue that same type of volunteering.

“I came in, applied for a job and they put me to work,” he said.

According to Darlene Supplee, director of the Fairbanks Senior Center, Severns never missed a Monday, unless it was a day he had previously arranged for time off.

“He’s one of the kindest souls I’ve had the pleasure of crossing paths with,” Supplee said.

The service he provided for the community was invaluable. Often, Meals on Wheels drivers are the only human contact for residents who are homebound, making the delivery visit a wellness check as well.

One of his stops on the delivery route was a home with a 200-yard unplowed driveway. After several weeks of walking that long driveway to the house — hauling meals for seven days and a five-gallon jug of water — the homeowner provided a sled, which made that delivery a little easier for Severns.

Severns and his wife Anne will celebrate their 67th wedding anniversary in December. Together, they raised six children.

“I wouldn’t trade it for anything,” Anne said.

Severns was all-smiles at his heartfelt retirement gathering.

“I’m glad I was able to make a small contribution to the community I live in, as a volunteer,” he said.

“It’s a good thing he worked as long as he did because he had sense enough to quit,” added Anne, with a laugh.

Severns’ meal delivery route is being taken over by another community member, who is not worried about taking over the tough task because he has Severns’ phone number already programmed in his cell phone. He’s ready on speed dial if he ever needs advice or direction.

Thank you for your service, Mr. Severns! You have made an impact in so many lives.

If you were inspired by this story, So Share This!