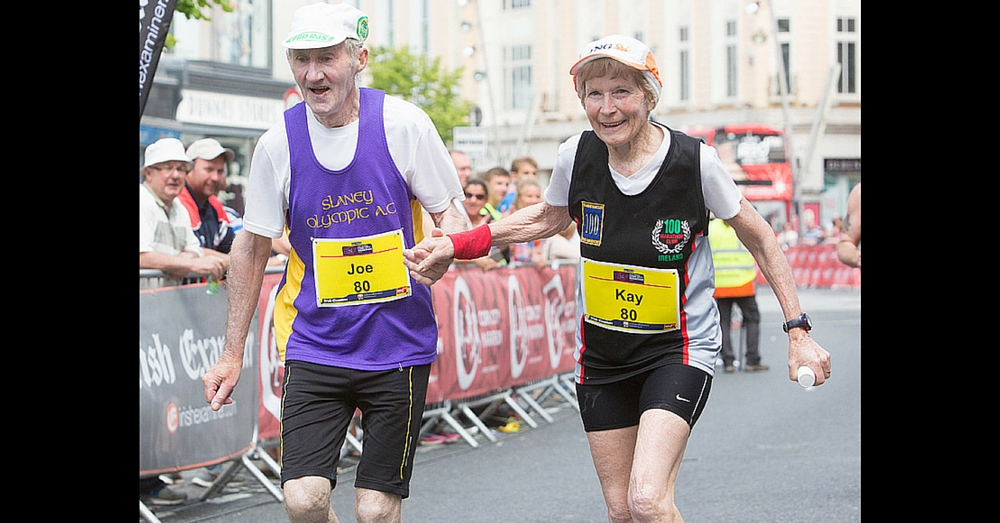 Kay and Joe O’Regan didn’t start running until they were both 50 years old, but the couple has certainly made up for lost time. They finished their first marathon – the London Marathon – hand in hand in 1986, and since then Joe has run 29 marathons while Kay has run 113.

Earlier this month, the 80-year-olds finished what they said would be their final marathon together the same way they did their first – holding hands. Not only did they finish the Cork City Marathon together, but they finished with the fastest times for their age groups – 5:25:29.

The couple had many friends and supporters cheering them on throughout the race. Joe said their cheers, as well as the support of his wife, helped him finish the race strong.

“We had lots of friends on the course, and when I felt like I was slacking they provided a bit of a lift,” Joe said.

Kay added that when they started holding hands for the last half-mile of the race, Joe picked up his pace.

“He seemed to get a second wind there,” she said. “We raced up to the finish, really. We were able to sprint.”

Joe said he is surprised by all of the attention they have received.

“We aren’t special or extraordinary,” he said. “As far as we are concerned, running is just something we do.”

The couple had planned for this to be their last marathon together, but after finding out that they were just 250 days shy of the Guinness World Record for the oldest couple to finish a marathon, they might be rethinking things. “Never say never,” Joe said.

The couple credits running for keeping them feeling young and keeping their marriage strong.

Are you impressed by this couple’s impressive feat? So share this!