80 Kids Trapped As Fire Closes In, Then They See Something Come Through The Flames 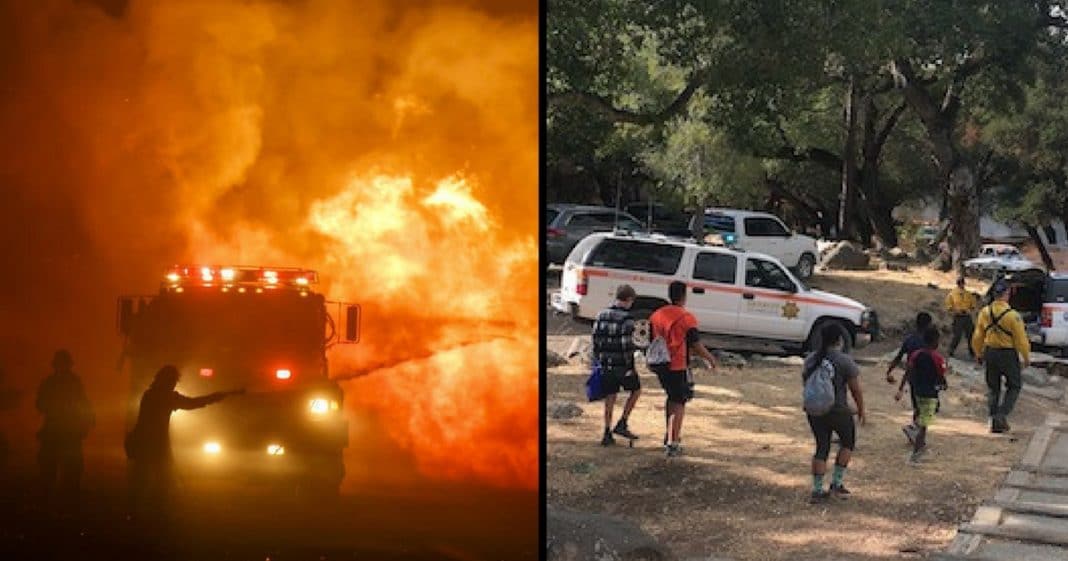 It seems like for the past 10 years or so, summertime in California has become synonymous with fires. All across the state, fires have swept through the drought-plagued forests and plains, leaving death and destruction in their wake.

Currently, there are several fires raging throughout the state, one of which is the Whittier fire, which started near a campground in Santa Barbara County.

Because it’s summer, many kids are attending camps in the area where the fire originated. Emergency crews did what they could to evacuate everyone from the area, but then they got word that 80 children were trapped at the Circle V Ranch Camp with no way to get out.

The roads leading up to the camp were engulfed with flames and scattered with falling debris. The staff had tried to get the kids out, but every escape route was blocked.

The staff comforted the frightened children as they gathered on an AstroTurf field. They didn’t know it at the time, but they had a knight in not-so-shining armor coming to their rescue.

Mark Von Tillow, the Division Chief for the Santa Barbara District of the Los Padres National Forest and the Incident Commander for the Whitter Fire, had tried to send law enforcement officers up the road to access the camp several times, but every time they tried they were met with walls of flames and forced to turn back.

Finally, one Forest Service employee was able to reach the frightened group, but as the flames continued to close in around them, he didn’t know if any of them would make it out alive.

Thankfully, the U.S. Forest Service has held a basic training camp for women at the Circle V Ranch for the past few years, so Von Tillow was familiar with the layout of the camp. He instructed the employee to have the kids and staff shelter in place on the field and wait for a rescue team to reach them. If all else failed, he told them, they should jump into the nearby swimming pool.

As the Forest Service employee did his best to keep the kids calm, Von Tillow ordered aircraft to drop retardant around the perimeter. Then a Santa Barbara County Fire Department bulldozer pushed its way through the flames toward the camp, clearing a path for rescuers to use.

About four and a half hours after the ordeal had begun, rescue crews were finally able to get to the kids. Miraculously, not one of them was harmed.

“We accounted for all of the kids, and loaded them up,” Von Tillow said. “The dozer came to the front of the line and cleared the road on the way out with all of the other cars in tow. This place was still on fire, trees were falling and rocks were moving. It was very heroic work.”

Von Tillow later admitted the work they had done was incredibly perilous and every rescuer’s life was on the line, but it was worth it to save those kids. The story could have had a tragic ending, but thanks to the heroic efforts of Von Tillow and the other rescue crews, every single one of those children was reunited with their parents.

Will you join us in keeping these fire and rescue crews in your thoughts and prayers as they fight these fires? So share this!