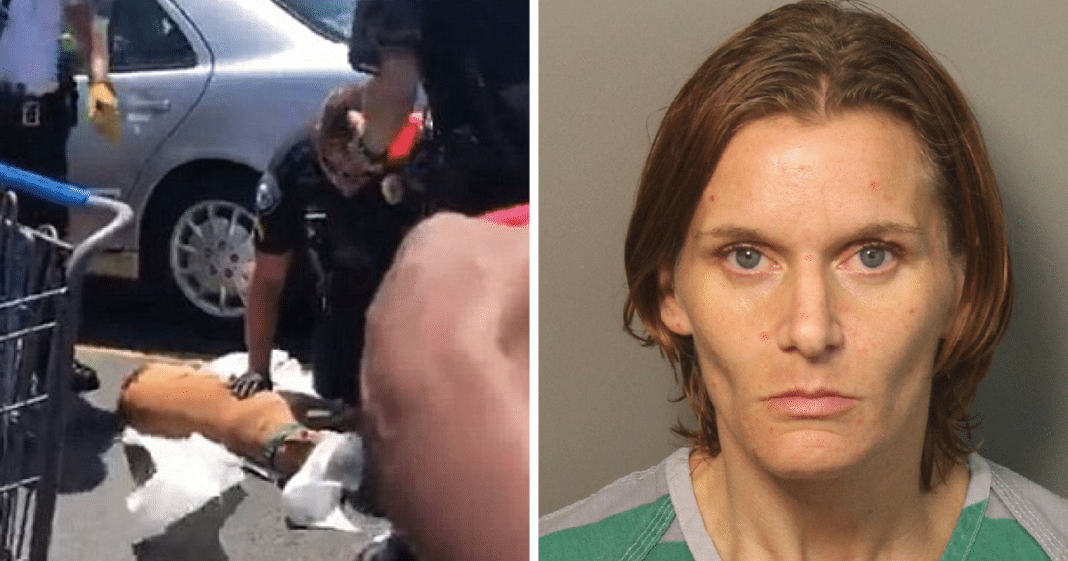 Despite rescue efforts by police and tearful bystanders, a dog freed from a hot car in the Birmingham suburb of Trussville, Alabama took its last breath on the pavement.

Trussville police said a woman had parked the vehicle outside the Walmart around 4am. The poor pup wasn’t removed from the car until seven hours later. 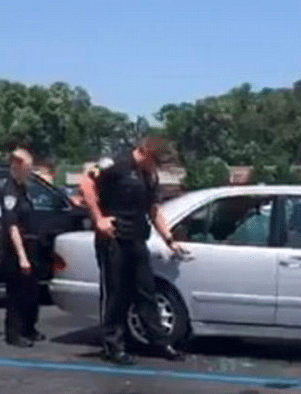 Bystander Stacy Guthrie shot video of the drama as it unfolded in the parking lot. The video footage shows a huge crowd of worried people surrounding the car as police try to get it open and rescue the dog.

‘That dog is gonna be dead by the time they get that door open,’ one person can be heard saying nearby.

Police routinely keep trying to get the crowd to disperse, but the worried shoppers refuse to leave. ‘I wanna make sure the dog’s okay,’ Guthrie says from behind the camera. 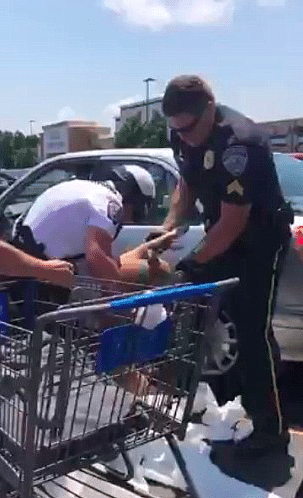 Finally, the police manage to break the window open and the 7-year-old pitbull-boxer mix, Sky, is brought onto the pavement.

At first, the crowd says they can see the dog breathing as police lay him on paper towels and give him water. Guthrie and another Good Samaritan then hold up a blanket to try and shield the dog from the sun.

They lay ice on the dog’s head and rub his body with water as some shoppers say ‘come on puppy’.

But it was too late. Sky died just minutes later. 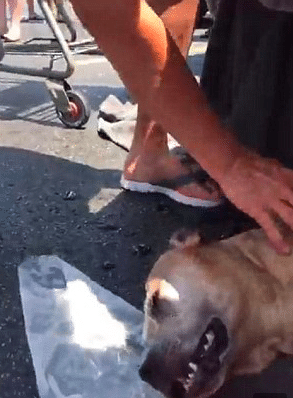 Some of the bystanders, including Guthrie, broke down in tears at the tragic scene.

‘There were so many people standing around, really pulling for this dog, and the outcome was not what we hoped for,’ Guthrie told the Associated Press.

‘When the officer said she was no longer breathing it was heartbreaking.’

Guthrie wrote on Facebook that there were ‘multiple efforts’ to break the window with a tire iron, flashlight, and other items before she began filming. 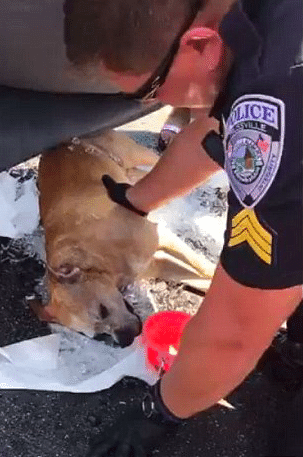 She said the car’s owner was also paged multiple times inside the store, by a description of the vehicle and then by name.

‘No one is to blame except the owner,’ Guthrie wrote. 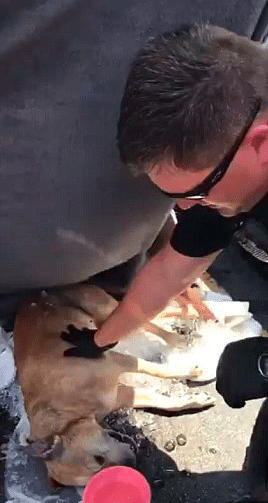 ‘I know it is very hard to watch and very frustrating but I think everyone at the scene did what they could or knew to do.’

The owner, Stephanie Shae Thomas, 34, of Trussville has been charged with a felony warrant. She returned to her vehicle about an hour after police officers first arrived.

“Ultimately, I killed my dog,” Shae Thomas said through tears. “I can’t change that. I want to, but I can’t.”

“Just thinking about what she went through the last moment’s she was alive,” Thomas said. “She had to be waiting for me to come out there and help her. And I didn’t.”

Thomas said she doesn’t even remember going to Walmart.

She said she is a long-time drug addict. Her rap sheet includes heroin possession. She said she hasn’t taken heroin in four years but says she still takes suboxone. Thomas said she is bipolar and recently ran out of her medication. She says that’s why she got disoriented on Wednesday and doesn’t remember going to Walmart.

According to Jefferson County District Attorney Mike Anderton, Thomas could face life in prison if convicted due to her criminal history that includes previous felony convictions. Anderton said normally this Class C felony carries up to 10 years in prison.