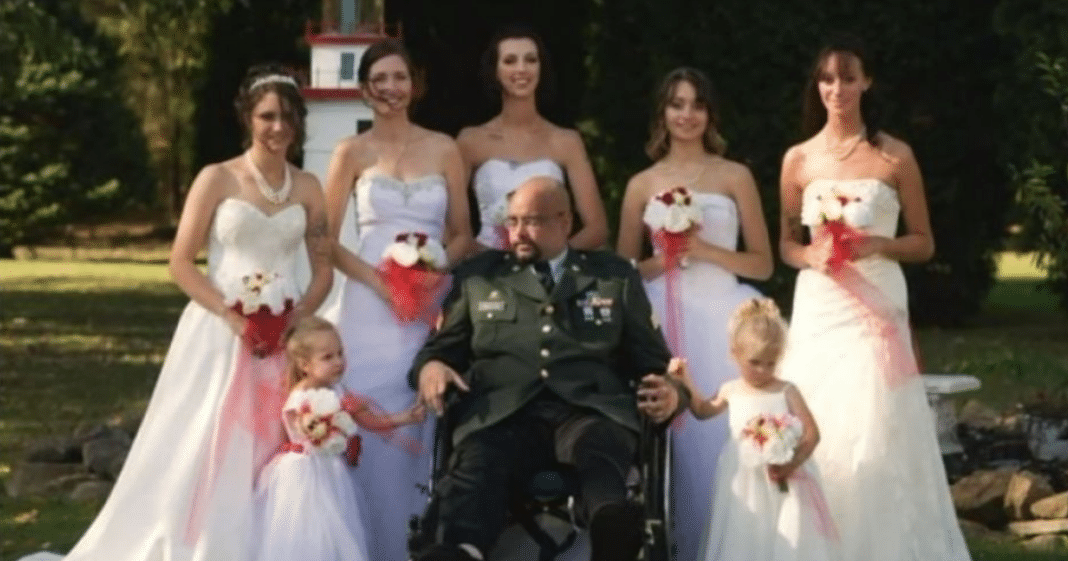 When Willie Shelton was diagnosed with terminal cancer, his greatest wish in life remained the same as it had always been: to walk each one of his seven daughters down the aisle.

Tragically, with the U.S. Army veteran’s declining health, he and his family knew the chances of him getting to do so were slim to none.

But that didn’t stop the Shelton family from devising a secret plan.

In just three days, Willie’s wife Cheryl and their seven daughters teamed up with LifeCare Hospice, David’s Bridal, a local hair salon, and a professional photographer to create an experience they were sure Willie would never forget.

Willie was under the impression that he would be giving away his daughter Emily during a vow renewal ceremony, but the true plan was something far beyond what the beloved dad could have expected.

A FINAL WISH.Willie Shelton's wife says he had one great wish during his fight with terminal "I want to see my girls grow up," says Cheryl Shelton "and I want to walk them down the aisle,'" He has 7 daughters. and cancer would prevent him from seeing them grow but it's the second part of that wish that they could grant.In 3 days they planned a very special secret wedding ceremony.One of the seven daughters is already married so they told their dad she wanted to renew her vows.Emily Flinn says "We got married at a courthouse so there wasn't the formality to it where he could actually give me away," .Three days later Willie put on his dress uniform for this backyard ceremony and then one by one each of his daughters came out of the house, all in wedding gowns.HIs wife said, "He looked a little confused , and then it was just great to see everybody. This was very touching for him and it was a dream that we could fulfill to the best or the closest we could possibly do," .They also had a father-daughter ceremony performed by Millersburg Christian Church Pastor Wes McElravy, and Willie was helped out of his wheelchair to stand with his daughters and experience his greatest wish."I always assumed that my dad would be there to walk me down the aisle and when the possibility was there that he wasn't going to be able to — this was everything," said Lindsey Shelton.Less than two weeks after the ceremony, on Monday, October 16, Willie Shelton passed away.All seven are getting a locket with a photo of their father with them in a wedding dress, and the words, "a father's love never ends," engraved on the back.

Willie thought his six other daughters would be serving as Emily’s bridesmaids during the backyard ceremony – so you can imagine his surprise when each of his daughters emerged from the house in a wedding gown. One by one, he watched his daughters gather around him in beautiful white gowns. At first, he was confused… then reality hit.

Willie was helped out of his wheelchair so he could stand with all seven of his girls and fulfill his life’s wish.