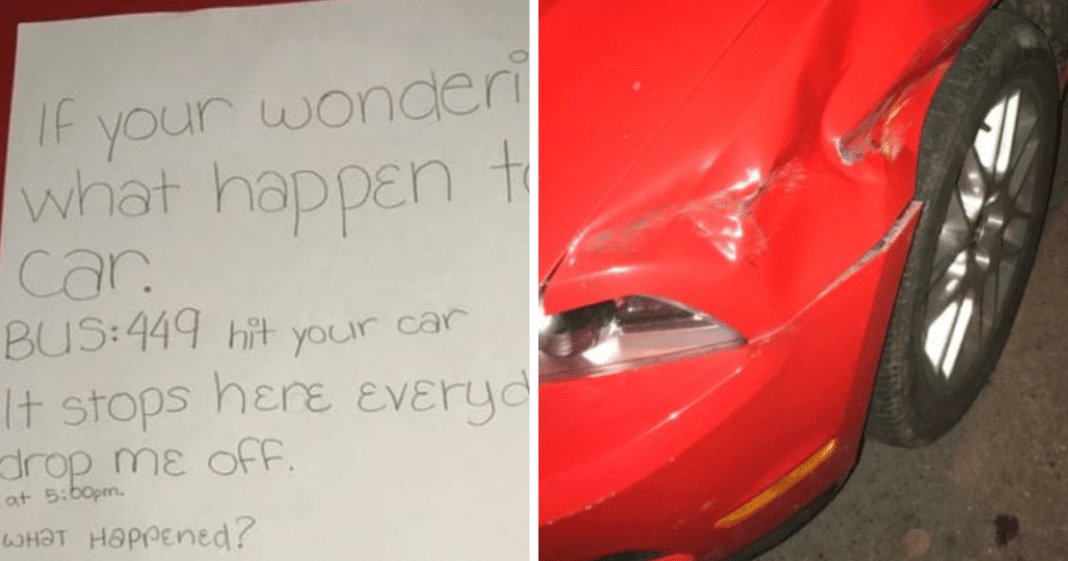 When college student Andrew Sipowicz returned to his red Ford Mustang after class on a recent evening, he was dismayed to discover the front had been hit by another vehicle and was badly damaged. His first reaction was “You gotta be kidding….” 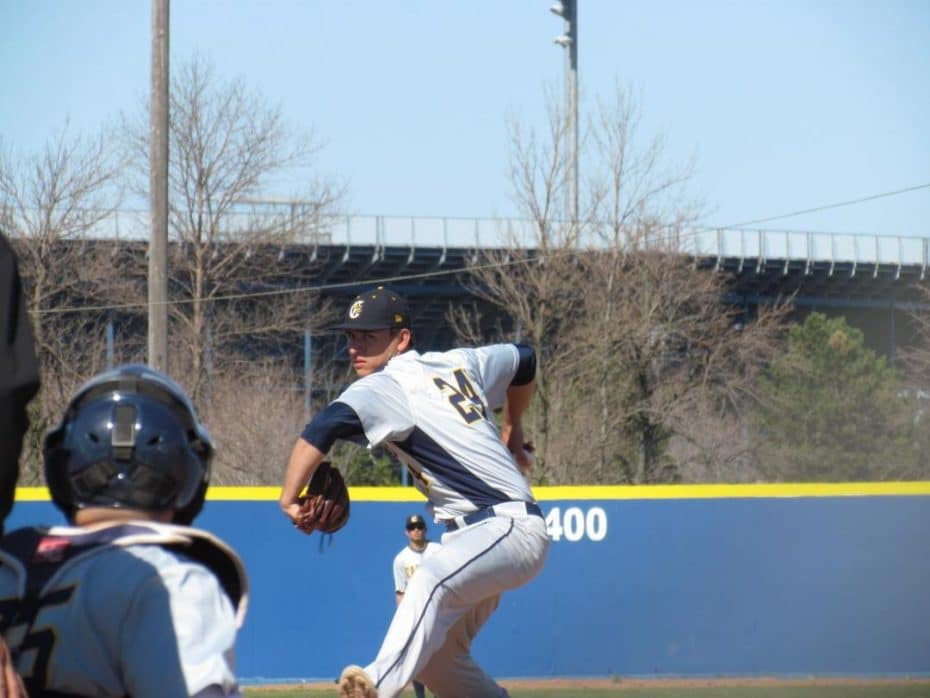 He was relieved to see that someone had left a note on his car, a common practice when a driver accidentally dents another car and the owner isn’t anywhere around. But this note wasn’t from the offending driver. It was from a 6th-grade girl at Buffalo Public Schools’ Houghten Academy.

Shoutout to the anonymous 6th grader for saving me a couple thousand (Bus not drawn to scale) pic.twitter.com/7aNK10xSwX

Here is a close-up photo of the damage that was done to Sipowicz’s car. 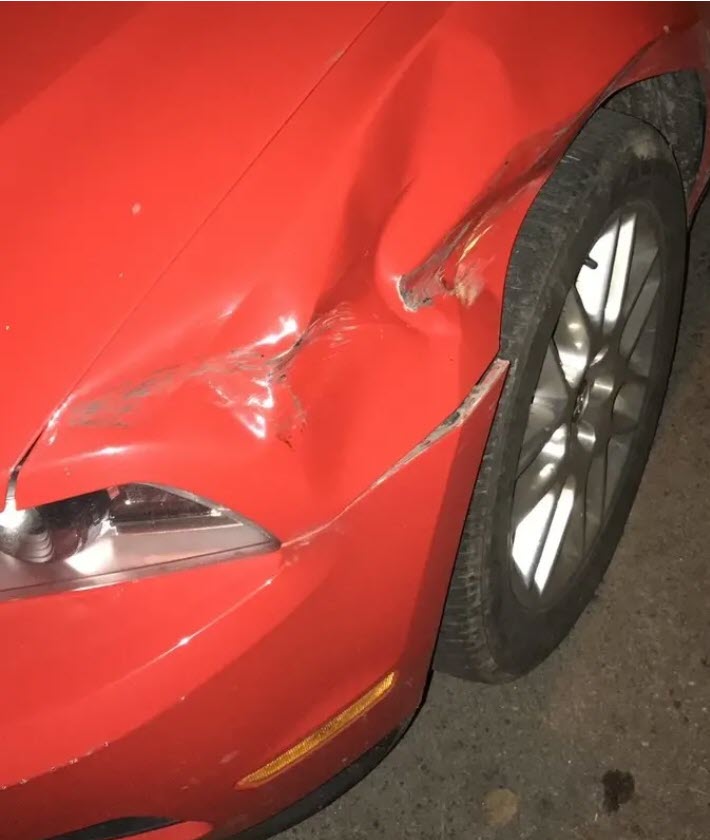 Sipowicz, who is a senior at Canisius College,  told BuzzFeed that he was “kind of in a panic” when he first saw the car, but that the note would save him a couple of thousands of dollars.

“I’m extremely grateful for what she did,” Sipowicz said. “It takes a lot of courage. It’s not easy to do, especially being that young. It’s easy to go home and go on with your day and act like nothing happened. But she thought she had to do the right thing and I’m really grateful she did.” (WKRN)

He (and everyone else on the internet) was absolutely delighted with the detail of the note, which featured bullet points of the incident, all of the information about the bus, a drawing of the bus, and even faces of what appears to be screaming, terrified children drawn in the windows of the bus.

“The detail of having two kids in the back of the bus yelling still makes me laugh when I look at it now,” Sipowicz said. 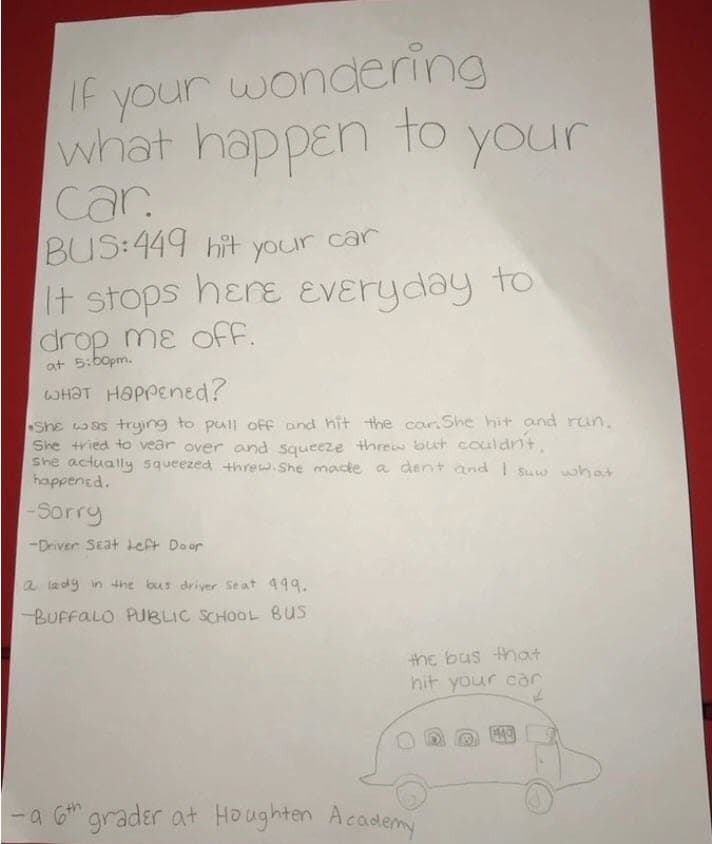 The school identified the managers of the bussing company as First Student. A company spokesperson followed up the next day apologizing profusely and congratulating the responsible young lady.

“We will cover the full cost of the repair to his vehicle as well as a loaner while his car is in the shop,” the company said.

Their commendation for the responsible young citizen:

“We would be remiss if we didn’t mention that we are very impressed by this exceptional sixth grader,” First Student said. (BuzzFeed)

The company also said that it’s working to terminate the offending bus driver. Sipowicz hopes that doesn’t happen. He said that it’s not completely clear if the bus driver knew that they had hit his car and “I really don’t want to get anyone in trouble.”

A teacher recognized the student’s handwriting and the school’s vice principal, Kevin Garcia, said that the school will celebrate the young lady’s “outstanding leadership” by presenting her with a special citizenship award.

“We want all of our students to be upstanding citizens. The district views ‘see something, say something’ in order to protect another person or persons to be a superb character trait across the board,” said Buffalo schools community relationships rep. (Buffalo News)

Twitter responses were awesome, with even some career ideas for the young lady.

This kid has a future in insurance lmao