6-Yr-Old Paralyzed In Gymnastics Accident. 6 Months Later Mom Looks Over And Sees It 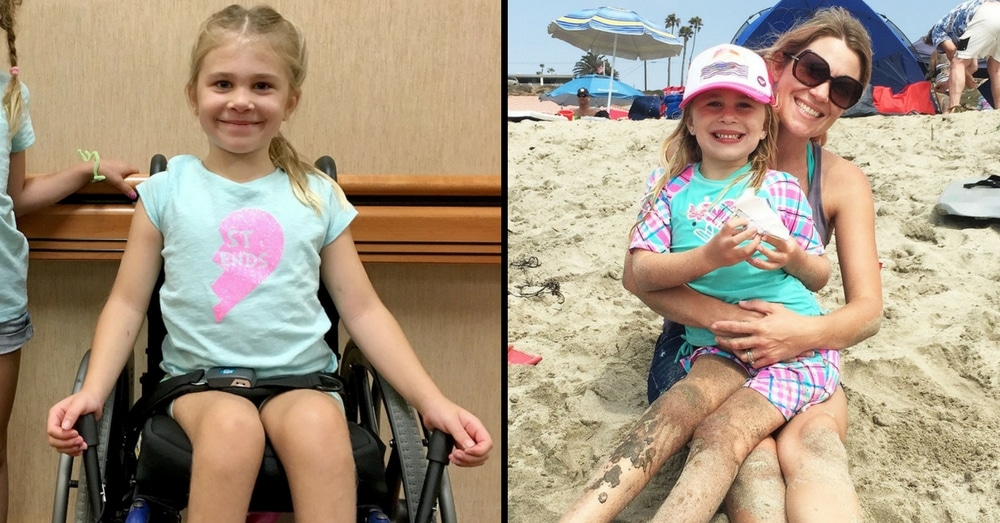 In December 2015 Eden Hoelscher was playing around in her living room when she collapsed after trying to do a backbend. Her mom, Kylee Hoelscher, walked into the room to find her young daughter sprawled on the floor, unable to feel her feet or her legs.

The family rushed Eden to the hospital where doctors told them the backbend had hyperextended her back, causing a stroke in her spinal cord that had left her paralyzed from the waist down.

The 6-year-old has put on a brave face since then, but that doesn’t mean things haven’t been difficult.

“She does have rough days where she says, ‘Mom, am I ever going to get better?’” Kylee said.

To give Eden the best care possible, the family moved across the country, from Palos Verdes, California, to Louisville, Kentucky, so she could get treatment at the renowned Frazier Rehabilitation Institute.

While there they noticed some marked improvements. Right after the injury Eden couldn’t even sit up on her own, but as she worked in therapy she started to be able to sit up, get dressed, brush her teeth, and take a bath all by herself. Still, doctors weren’t sure if she would ever fully recover.

Then, one day, a miracle.

After the family’s move, Eden’s best friend from California, Violet, decided to fly out to pay her a visit. Before she came Eden told her mom something that left her a little taken aback.

“Eden said, ‘Hey mom, I think when Violet comes, I think that she loves me so much that I’m going to walk when she comes,” Kylee recalled.

Little did Kylee know that her daughter’s words would prove to be a premonition of things to come.

“Part of her treatment involves locomotor training on a treadmill where she’s in a harness and they support a percentage of her body weight,” Kylee explained. “For an hour, they try to wake up her spinal cord and get it moving. Then they take her into another room and see what they can get her body to do.”

Her treatment session that day involved having a pretend sword fight with Violet. It was while they were in the middle of their imaginary battle that Kylee saw something that left her floored.

“They were having this imaginary sword fight and she just started taking steps,” Kylee recalled.

Eden’s family was overjoyed – there was finally hope that their little girl could return to a normal life!

While doctors still have no prognosis, the strides Eden has already made have been stunning and have affected her not only physically, but mentally and emotionally as well.

“She’s a lot more comfortable in her own skin — just comfortable in her body and with the way that she is,” Kylee said. “She can scoot all around the floor and she’s learning how to bump up and down stairs. She wants to be independent and she doesn’t want to constantly be carried.”

The family, which includes big sister Isabella, chooses to focus on the positive as they move forward with their lives.

Were you amazed to see Eden take her first steps? So share this!