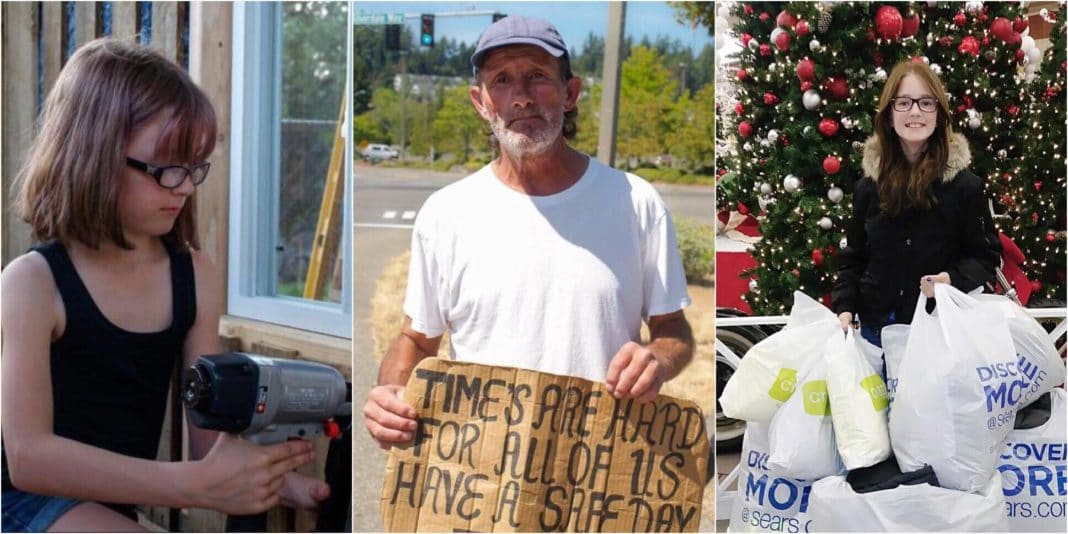 Some children are mature beyond their years; they see a problem and work to find a solution. It’s quite awesome to see them take charge to help those in need in their communities.

5-year-olds aren’t usually concerned with the lives of others. They’re caught up in their worlds of imaginary friends and childish daydreams. But one little girl from Washington state had an experience that would forever change her life.

Hailey Fort is 11-years-old. When she was five, her world changed when she met Edward, a homeless man living on the street. She begged her mother to buy him a sandwich. Hailey didn’t stop there. She wanted to help feed more people. She planted a vegetable garden at home and donated the harvest to the needy.

Six years later, Hailey still thinks of Edward who’s still without shelter. The enterprising little girl decided to build him a mobile shelter by herself. Yes. She’s hammering, drilling and sawing every nail and putting every piece together in this 8-x-4-foot mini home that’s equipped with a door, windows, and insulation.

“It just doesn’t seem right that there are homeless people,” says Hailey. “I think everyone should have a place to live.”

So Hailey works on Edward’s house every spare moment she has available. And Edward? Well, he’s determining what color he wants to paint the walls of his new home.

Once Hailey completes Edward’s house, she intends on building a dozen more: “I don’t want them to get so wet with all the bad weather we have here,” explains Hailey.

Hailey is changing the world her way. With one bountiful garden, she’ll feed dozens. One mini house will shelter at least one person from the cold dreariness. Go, Hailey!