4-Yr-Old Minutes From Death Wakes Up From Coma, Says 4 Words That Leave Mom In Tears 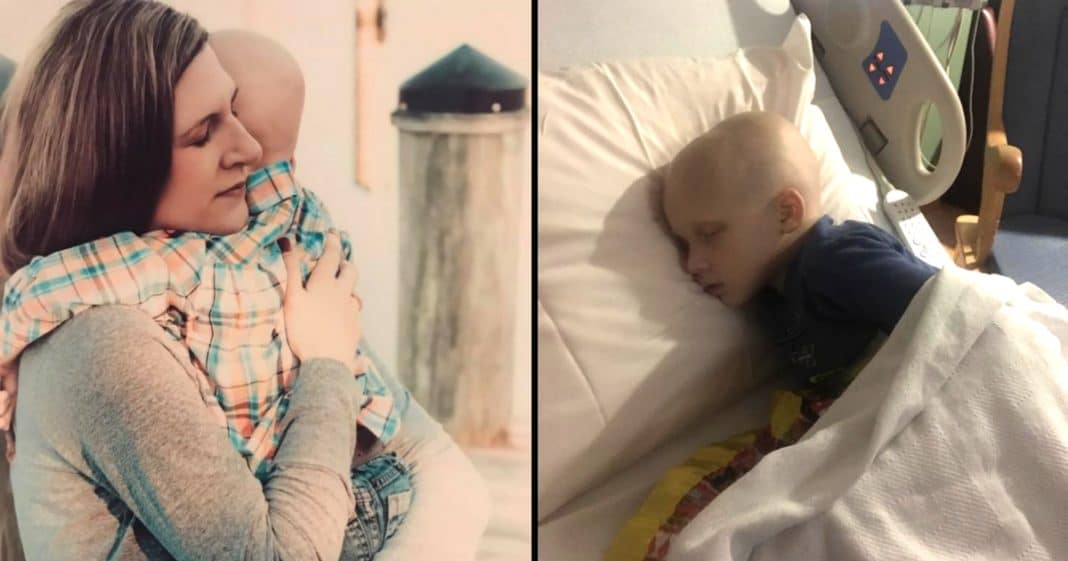 It all started with a stuffy nose.

Three-year-old Nolan Scully woke up one day with a stuffy nose but his mom, Ruth, wasn’t too concerned. All kids get colds now and then.

But it kept getting worse. Nolan was snoring and having trouble breathing at night and the antibiotics, saline sprays, steam, and humidifiers doctors prescribed weren’t doing anything to help.

Finally, a specialist noticed Nolan had swollen adenoids and recommended they, along with his tonsils, be removed.

The surgery went smoothly, but soon after came the devastating news. Doctors had tested the adenoid tissue and discovered Nolan had rhabdomyosarcoma, a cancer of the soft tissue.

The treatment took a toll on Nolan and all he wanted was to be near his mom. When Ruth would shower, Nolan would curl up on the bathroom rug until she was finished.

Thousands of people around the world prayed for Nolan’s healing, but soon it became clear that God wanted Nolan with him in heaven.

With pain in their eyes, Nolan’s medical team sat down with his family to discuss how they could make his final days as comfortable as possible.

Heartbroken, Ruth went to talk with Nolan and tell him he didn’t have to fight anymore, but his response left her stunned. She shared their conversation in a poignant Facebook post:

Me: Poot, it hurts to breathe doesn’t it?

Me: You’re in a lot of pain aren’t you baby?

Me: Poot, this Cancer stuff sucks. You don’t have to fight anymore.

Me: No Poot!! Is that what you have been doing?? Fighting for Mommy??

Me: Nolan Ray, what is Mommy’s job?

Nolan: To keep me SAFE! (With a big grin)

Me: Honey … I can’t do that anymore here. The only way I can keep you safe is in Heaven. (My heart shattering)

Nolan: Sooooo I’ll just go to Heaven and play until you get there! You’ll come right?

Me: Absolutely!! You can’t get rid of Mommy that easy!!

The family discussed taking Nolan home so he could spend his final hours in a familiar and comfortable place, but he gently placed his hand on top of Ruth’s and told her, “Mommy, it’s okay. Let’s just stay here, okay?”

Ruth sat with her son for a day and a half, trying to soak up every precious moment she could with him.

At one point, she asked him if it would be okay for her to take a quick shower.

“He said ‘Ummmm ok Mommy. Have Uncle Chris come sit with me and I’ll turn this way so I can see you,'” Ruth recalled. “I stood at the bathroom door, turned to him and said ‘Keep looking right here Poot, I’ll be out in two seconds’. He smiled at me. I shut the bathroom door. They said the moment the bathroom door clicked he shut his eyes and went into a deep sleep, beginning the end of life passing.”

When Ruth came out of the bathroom, Nolan’s medical team was surrounding his bed and she knew he was letting go. Heartbroken, she crawled into bed with Nolan, cradling his frail body with her own.

That was when something happened that Ruth can only describe as a miracle. As she held him, Nolan smiled, opened his eyes, and said, “I love you, Mommy.”

Then he was gone.

“My son died a Hero,” Ruth wrote. “He brought Communities together, different occupations, made a difference in people’s lives all around the world. He was a warrior who died with dignity and love to the last second.”

Now every time Ruth goes to take a shower she is wrenched by the memory of her son waiting on the bath mat for her to come back to him.

“Now I’m the one terrified to shower,” she wrote. “With nothing but an empty shower rug now where once a beautiful perfect little boy laid waiting for his Mommy.”

We can’t imagine the pain and grief Nolan’s family is feeling, but we know they have hope that one day they will see him again in heaven, and they know he is watching over them while he waits.

Were you touched by this story of Nolan’s life and legacy? So share this!