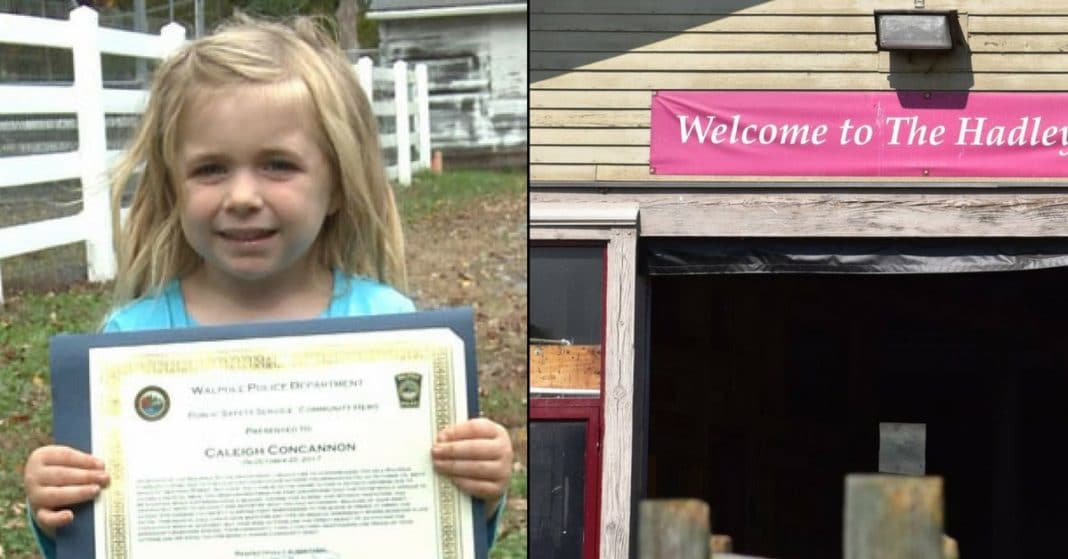 Never underestimate children and their abilities. Their brains are like sponges; they absorb everything around them – sounds, words, advice, actions.

The saying “Do as I say and not as I do” is a lame excuse for lazy parenting because children do the exact opposite. They mirror the people in their environment.

Use bad language? Children will think that’s normal. Yell and argue instead of talking things through? You guessed it.

Thankfully, though, this mimicking is not always a bad thing.

One little girl learned from those around her and ended up saving a life. Now she’s being hailed a hero by her community.

A few weeks ago, four-year-old Caleigh Concannon and her mother, Heather, spent some mother-daughter time volunteering at a farm in Walpole, Massachusetts, called Golden Opportunities For Independence which trains service dogs for people with disabilities.

At one point during the afternoon, Caleigh asked to go to the bathroom.

“She had asked to go to the bathroom. She knew where it was. So she ran in,” said Heather.

When the young girl entered, though, she noticed a man lying on the floor.

Caleigh knew this wasn’t normal because her daddy has diabetes. Her parents have trained her on what to do if he ever passes out.

Little Caleigh did what she would do if this man were her father: She went back to her mom and told her someone needed help.

When Heather entered the bathroom, she recognized the man as Michael Flynn, the director of operations at the farm. As she scoped out the situation, she realized Flynn had an epileptic seizure. She quickly called emergency services and thankfully they arrived in the nick of time to provide him the medical care he needed.

Because of her bravery and smart thinking, Caleigh is being lauded as a hero by the Walpole Police Department. They awarded her a Hero of the Community Award and free movie tickets.

“This morning Chief Carmichael, Deputy Chief Mackenzie, and several members of the WPD presented a young girl with a Community Hero Award. The award was presented to Caleigh in recognition of her actions during a recent medical emergency.”

“I am so proud of her,” he said. “I am just in awe at the responsibility and the seriousness and her perception in handling the situation.”

Thankfully, Flynn was able to get the medical care he needed and is now doing well.

We are so proud of Caleigh and her brave actions that day. She took action when many other adults would have responded with less poise and quickness.

What a smart little girl!

Are you impressed with Caleigh’s heroic actions? So share this!