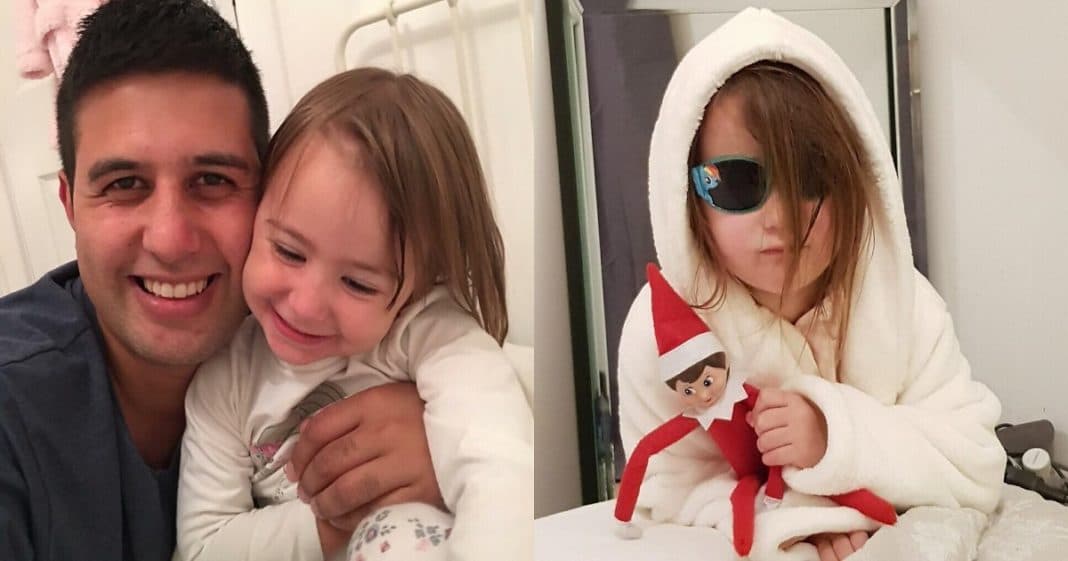 Mark Thomas, his fiancee, Kathryn, and his 4-year-old daughter, Evelyn, had a busy day on December 20th. They spent the day dropping off holiday cards to friends and family. As a reward for her good behavior, Mark decided Evelyn deserved a treat.

The three stopped off for a meal at the restaurant chain, Frankie and Bennys in Warrington in the U.K. Evelyn ordered a mocktail that consisted of orange and apple juice and grenadine. It was called a Fruity Sunrise.

Mark said: “She was really thirsty when the drink was brought over, so she had gulped about a third, but she recoiled and said she didn’t like it.”

“We thought it was just her being fussy, as most four-year-olds are. One week fish fingers are her favorite, the next week she doesn’t like them.  We looked at each other and told her to drink it because she likes fruit juice. She had a few more sips but no more.”

“Then the waitress came over and was really worried, she looked like she was about to cry. She told us that she had accidentally given Evelyn a real cocktail.”

It turns out little Evelyn wasn’t a finicky drinker after all. A horrible mistake had been made. Instead of knocking back a mocktail, she consumed one-third of an F&B on the Beach – a drink made of vodka, peach schnapps, orange juice and cranberry juice.

Drunk a little too much over the festive period? Our cocktail menu also boasts some tasty mocktails. We love the Amalfi…

Poor Thomas and Kathryn; that poor waitress; but really, poor Evelyn. I don’t know who I sympathize with the most. Mark had to be petrified. The waitress’s mind had to be racing. As for Evelyn? Well, she wasn’t yet feeling the effects of the drink.

Mark wrote about this experience on his blog: “Me and Kathryn just looked at each other, I don’t think I believed it at first. The waitress was really apologetic.  I didn’t really know how to react but I acted kindly towards the waitress and told her not to worry and that we would keep an eye on Evelyn. We kept asking her if she was okay and if she needed  anything but she said she was fine.”

“Then she stood up in the booth and just started dancing. Four-year-olds are silly anyway so we weren’t sure if it was the alcohol or just her being a four-year-old.  She told us she needed a wee so I took her into the baby change toilets as there was more room in there. I wanted to see if she could walk but she was swaying, she also walked into a post.”

“I led her into the toilets but she didn’t have a wee – she did start to look in the mirror,  laughing at herself and telling funny jokes.”

These antics would usually be funny if not for the situation. Mark and Kathryn knew Evelyn’s behavior wasn’t normal for her anyways. A fact which Mark points out: “This may have looked normal for any other four-year-old, but I knew it wasn’t normal for Evelyn.”

Soon after, the pair tried getting Evelyn to eat some garlic bread to help soak up the alcohol. She didn’t eat a single crumb.

“At this point we were getting quite concerned. She couldn’t eat the garlic bread  so I got her some ice cream as I know alcohol can lower the blood sugar levels in children but she  still couldn’t eat it,” Mark said.

The couple was told by an emergency operator to take Evelyn to the emergency room for a check-up. Mark revealed how much it frightened him when he couldn’t get Evelyn to wake up. But all was well after they went to the hospital.

“They did tests and she couldn’t walk in a straight line. Anything serious was ruled out and we were told she was just tipsy and to keep an eye on her. “They said she would have a hangover. I couldn’t believe it, she was four years old and about to have her first hangover.”

Any parent would react with such shock. Mark questioned the incident on his blog by writing, “How does someone put alcohol in a kid’s glass and hand it to them? Is it as simple as someone doing just that, or is there a fault in the procedure that would give rise to the chance of this happening?”

Mark and Katheryn empathize with the waitress. She was just doing her job. They don’t blame her for what happened; they don’t want her disciplined. They do though, want more action to be taken so no other children end up accidentally consuming alcohol.

He suggested serving the mocktails in a cup that is immediately recognizable to staff and patrons alike. He says that the employees need better training.

Frankie and Benny’s released a statement, which read in part: “We sincerely apologize for this unfortunate incident and any distress caused. Our staff acted quickly as soon as they became aware of the situation. This was genuine human error and we will do our utmost to ensure this does not happen again.”

The restaurant also offered Mark a voucher for a free meal, which he declined. He found it “unacceptable.” He won’t be returning to the restaurant in the near future, perhaps never.