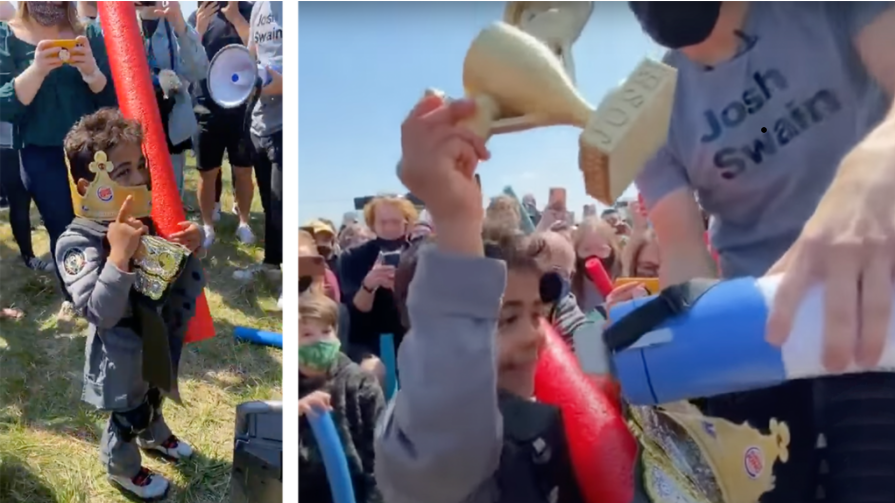 Josh Swain, 22, was bored one day during a Zoom lecture. Then, the University of Arizona student came up with a curious idea: he would reach out to nine other people sharing his name by creating a Facebook group.

Then, he would call for his name twins to converge at random coordinates near Lincoln, Nebraska, for a Battle Royale, the “Battle of the Joshes.” Bring your own pool noodles. After a joust, the winner would claim the rightful use of the name Josh. All remaining competitors would need to change their names.

Of course, he was joking, but online, there’s no telling what may happen.

We’ve seen it before when Paul O’Sullivan, 33, reached out to others with his name. What started in jest became a real-life band playing remotely (and wonderfully) during the pandemic.

As with the Pauls, Swain didn’t initially expect much from his random social media post. However, as sometimes happens on social media, ideas can take on a life of their own. For example, who remembers the “Storm Area 51” Facebook event in 2019? A viral meme and joke turned quite real when 2 million people RSVP’d.

Bored silly as most of us have been during the pandemic; Swain made the following post to Facebook:

“You’re probably wondering why I’ve gathered you all here today,” he wrote.

In response, another Swain wrote: “Because we all share the same names?”

Then, Josh wrote something random, not intending the others to take it seriously:

From there, the internet took the post and ran with it, similar to the now-infamous Storm Area 51 event. Josh shared his idea to Twitter, where it went viral, reaching almost 23 thousand shares and 64K likes.

Then, other people shared it on their own to Reddit, spawning a hilarious ongoing  Josh Fight meme craze.

Although the Josh Fight went viral online, interest seemed to die down. However, the real fun was just getting started. As the April date approached, people posted, showing they intended to start traveling to the coordinates.

Also, somebody took it upon themselves to create a website for the event, complete with a countdown. (Today, it stands ready for a future repeated even with the word “Soon” in place of the countdown.)

To make it more interesting, the rules of the event somehow shifted. Now, anybody named Josh could come, regardless of their last name. As you can imagine, there are plenty of adventurous people sharing the name across the country.

That’s when Josh Swain, a civil engineering student, realize this thing was happening for real. However, he soon realized his random coordinates were on private property! So, he’d need to arrange a new location and prepare for a crowd.

Battle Royale for a Good Cause

Since this thing was happening, “Actual Josh,” as he now called himself, decided he would choose a big public field at Air Park. Then, he thought the event could benefit a good cause, an Omaha Children’s Hospital. Attending Joshes were asked to bring food to donate to the area Food Bank.

“Joshs, I am calling on you to uphold the honor that the name possesses and to be good stewards of this event,” he wrote.

Since the event was happening during the pandemic, he called for everyone to wear masks.

Hundreds of Joshes Arrive on the Battlefield

By noon on Saturday, April 24, around a thousand people showed up at the “battlefield.” Amazingly, Joshes and their friends and families traveled from all over the country. In attendance, people of all ages were ready for the pool noodling main event.

Before the noodling began, Josh Swain battled with another Josh Swain from Omaha in a duel of Rock, Paper, Scissors. Actual Josh came out on top, and the madness commenced as noodles were flying everywhere.

One man, Connor Hogan from Montrose, Colorado, cleverly used pool noodles attached to a cordless drill. Thus, the noodles spun around, and he didn’t need to swing them himself, reported the Lincoln Journal Star.

“Better to ask for forgiveness later than permission now,” he said.

Judging by the video, this was quite a battle, with pool noodles flying in all directions. All around, a cheering, giddy crowd of Joshes seemed to be having the time of their lives. Meanwhile, Actual Josh was overwhelmed by the attendance and had a huge pile of non-perishables to donate for charity. In all, people donated over 100 pounds of food, over four carloads.

After over ten minutes of battle, a victorious 4-year-old Lincoln resident, Joshua Vinson Jr., was the last Josh standing. The crowd cheered, and a man paraded him around on his shoulders with a championship belt.

“Ladies and gentlemen, this is your champion,” Actual Josh shouted from a megaphone.

Thus, “Little Josh,” as he became affectionately known, became the ultimate Josh. He claimed a trophy and wore a Burger King crown that fell to his shoulders, wielding a red pool noodle about equal to his height. Little Josh’s father had come across the event by chance on Facebook and decided to bring his son.

See the video below from KMTV 3 News Now:

Unexpectedly, Little Josh won the crown and title of Ultimate Josh, and the event benefitted the Children’s Hospital. Vinson Sr. had no idea that the event would benefit the hospital at the time and shared a heartwarming story about his son.

“He loves attention,” his dad said. “He’s always wanted his own YouTube channel, so there he is. He’s famous.”

An Annual Battle of the Joshes?

Although initially a random idea, the event was an incredible success, offering some fun and relief during an otherwise gloomy year. Amazingly, the crowd raised over 8,000 dollars for the Children’s Hospital, where Little Josh once received treatment.

“It’s been such a really good show of people coming together for a good cause, but also something just really fun,” she said. “I think after everything we’ve been through in the past year, it’s really good that we’ve had this.”

Although it started as a whim, the event might become an annual event now.