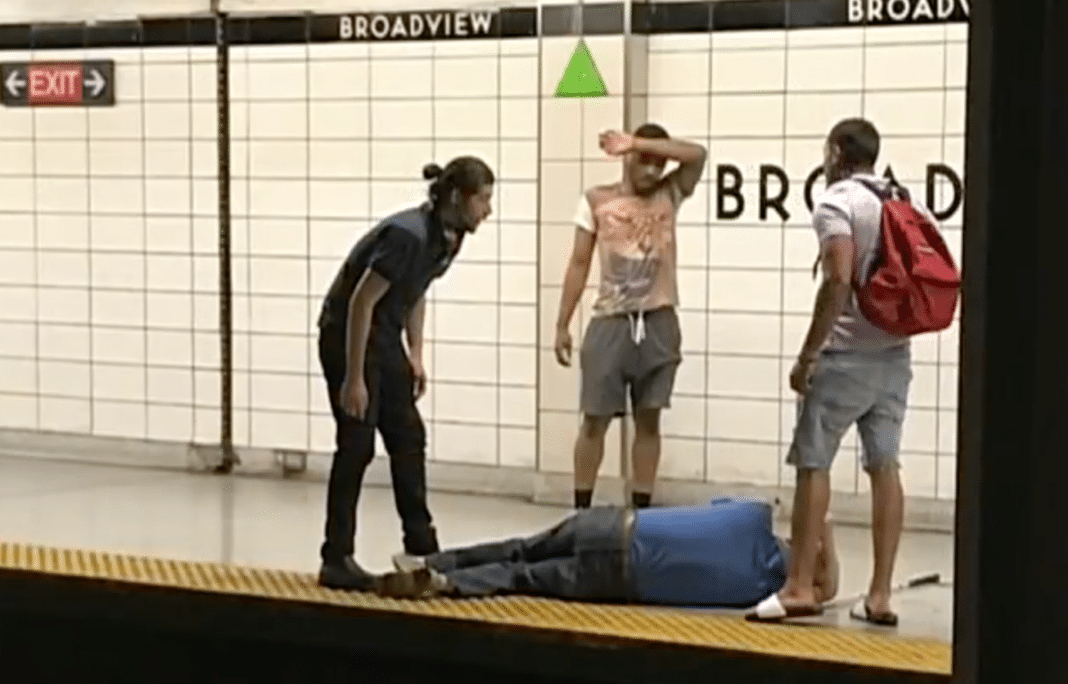 A ride on the subway turned into the fright of a lifetime for one subway passenger in Toronto. Upon arriving at the station, she overhead a faint cry for help, but couldn’t locate the source at first.

Getting up to her feet, Julie Caniglia looked outside onto the tracks below. She was horrified to see a man with a walking cane lying on the tracks. The blind man had stumbled from the platform and injured himself.

There was no way she could lift the man to safety, and if she jumped down onto the tracks she might be crushed by a subway car at any moment.

Fortunately, she didn’t have to:

“Without hesitation, the man you see in this picture in the animal shirt jumped into the tracks to pull him out.”

The Good Samaritan was identified as a 24-year-old landscaper named Kyle Busquine. He had taken the subway only after he had tried to take the train but was unable due to a problem.

this afternoon I had the fright of my life. when my subway car pulled up at Broadview station I heard a faint voice call…

Kyle was wearing flip-flops and the conductor yelled to warn him that the third rail could electrocute him.

According to Caniglia, a Toronto Transit Commission (TTC) officer then jumped into action to disable the dangerous power lines. An “emergency power cut button” is at the ready for passengers at the end of the platform for situations such as this one.

“We don’t advise anyone to go to track level. Our thoughts are with the individual who fell at Broadview Station earlier today and we thank bystanders for their quick action and assistance.”

And fortunately for Kyle, there were two other unidentified kind men who jumped in to help him.

Julie Caniglia recalled that the passengers around her were all anxious until the fallen man was back on the platform.

“Until he was up on the platform, I don’t think anybody breathed. It was just like, every second seemed like a minute,” said Caniglia.

After the rescue, everyone exhaled, applauded, and happily hugged each other.

The injured man was taken to the hospital and had only minor injuries.

Caniglia wanted to recognize the young men who jumped onto the tracks for their good deed:

“Please pass this photo around, these men need to be recognized as good Samaritan’s. If they hadn’t reacted so quickly, the outcome would have been horrific.”

See more in the video from CityNews Toronto below: