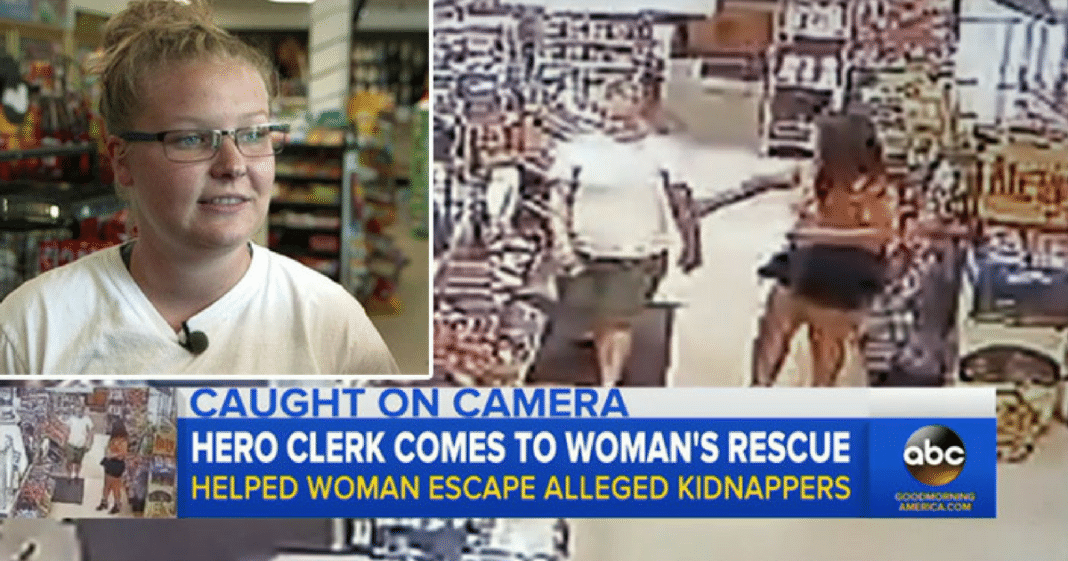 In Waterford, California, a gas station clerk is being hailed as a hero when she saved the life of an unidentified woman.

Savannah Pritchett, 24 is this brave young woman. She acted quickly when a woman came into the gas station. Grabbing her wrist, she pleaded: “Please, please help me. I’ve been kidnapped, they have two guns.”

Savannah didn’t hesitate. She hurried to lock the front door. She handed the woman her cell phone before locking her in the bathroom. Only minutes later, two of the alleged kidnappers attempted to enter the gas station. Surveillance footage shows sheriffs deputies, their guns drawn, arrive at the facility minutes after.

Two of the criminals were apprehended at the scene. Detectives recognized the remaining pair and arrested them.

“They asked me, you know, ‘Why’d you lock the door?’ and I told them she told me she started her period,” Pritchett told Fox 40.

A Waterford gas station cashier is a true hero. Her bravery and quick-thinking saved a woman who was kidnapped and…

“A Waterford gas station cashier is a true hero,” the department wrote. “Her bravery and quick-thinking saved a woman who was kidnapped and sexually assaulted. The victim showed up at the gas station, begging for help. The clerk stepped up, locked the doors, hid the woman and called our deputies.”

Well done, Savannah. She did the right thing. Have you ever been faced with a situation where someone in danger looks to you for help? What did you do?