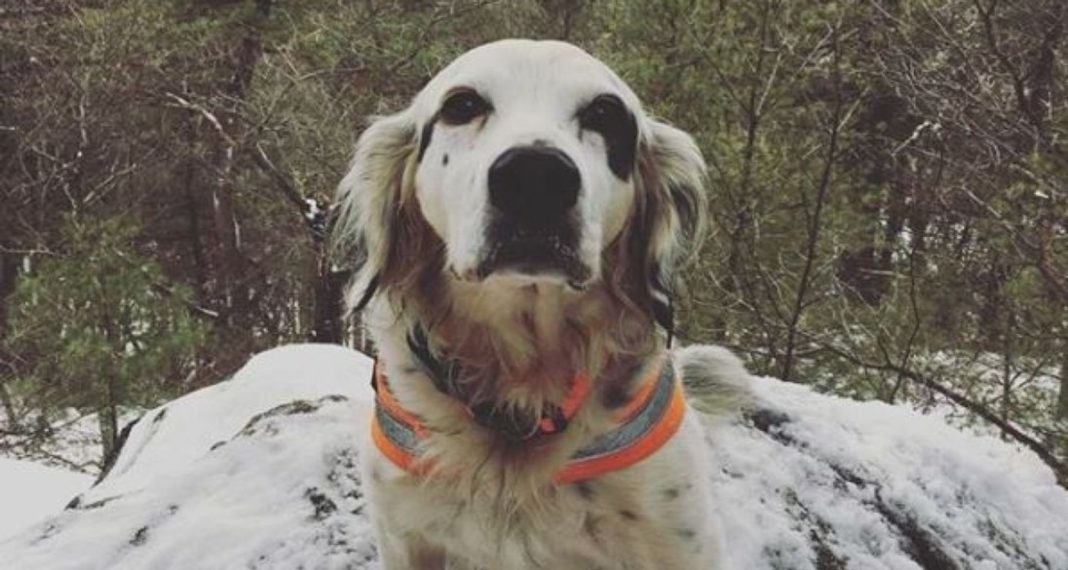 It may seem like a cliché at this point to say that dogs are “man’s best friend,” except these furry creatures continue to render the statement woefully inadequate. An example of this is Pete, an elderly foster dog who died bravely protecting his family from a black bear while on a hike.

Pete was a 13.5-year-old English Settler, he had been adopted 18 months earlier by his foster parents who owned a dog-walking and pet-sitting service and was one of the oldest pups among the rest of his fellow canines.

The owners enjoyed touring the woodlands of Greenwood Lake, New York with their dogs, oftentimes documenting the walks on their Facebook and Instagram pages.

The owners could never have predicted that one Sunday walk would end tragically.

In a detailed Instagram post, female owner Cathi shared a statement by her husband Stephen Parisi describing the moment he and the dogs ran into a startled black bear.

“The dogs surprised a black bear just off the trail while we were hiking this morning,” he said. “It felt threatened and turned around.”

The owner then ran to safety with the rest of the dogs, but Pete bravely stayed behind, fighting off the wild animal. The man said he tied the animals to a nearby tree before returning to help his fearless canine.

The bear eventually ran off, but the confrontation left poor Pete “gravely injured.” The owner carried the wounded pup back down to the main trail where he was transported to a vet hospital.

X-rays showed a spinal cord injury that would cause the dog to never walk again. At his age, surgery was not the best option.

Below is an account from my husband of yesterdays pack walk. "Today we lost our brave, old man Pete. The dogs surprised a black bear just off the trail while we were hiking this morning. It must not have heard or smelled us with the pouring rain. It felt threatened and turned around. Pete stepped up and held off the bear until I could get the other dogs to safety. Once I was sure they were safe, I went back and scared the bear off, but Pete was gravely injured. I was able to get him back down to the main trail and, thanks to Cathi and Kate, we were able to get him in a car and to the hospital pretty quickly. He held on like a real trooper the whole time, and he was never alone in his pain. The x-rays revealed some pretty bad spinal damage that would mean he could never walk again, if he survived all the surgeries (not a certain thing at his age). We decided it was best to let him go this afternoon. Run free Pete, you no longer have all those aches and pains of old age. You had a great 18 months with us running the days away like you loved." Please light a candle for Pete and remember that fostering and rescuing a dog can sometimes save you. Senior dogs have so much to give. Love you Petey. Save me some cheese for when we see each other again. ❤️?❤️

“He held on like a real trooper the whole time, and he was never alone in his pain,” the post read. “We decided it was best to let him go this afternoon.”

The emotional tribute has now gone viral. The canine’s untimely death spread rapidly through Twitter, with over one million mourning the loss.

Ben White, a friend of the owners and economic correspondent at CNBC, hailed the “hero” dog in a tweet now seen by over seven million.

The TV journalist wrote: “He was an older guy and went out a true hero. RIP PETE THE HERO!” 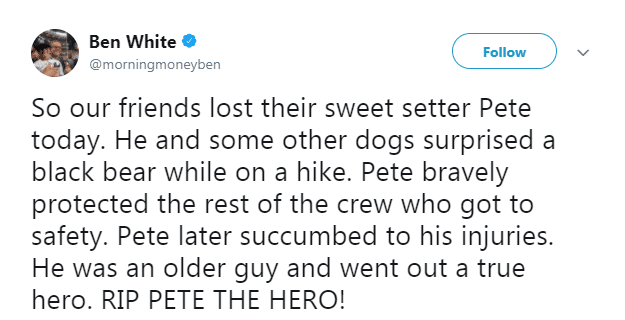 Cathi spoke of her loss, saying:

“Please light a candle for Pete. Remember that fostering a dog can sometimes save you.”

Pete was an elderly dog with a huge heart, who stood his ground even as other dogs ran to safety. He was willing to lay down his life for his friends and the man who rescued him. Rest easy, Pete and know that you are dearly missed!