11-Yr-Old Takes Photo With Aaron Rogers, Then NFL Star Tracks Him Back Down 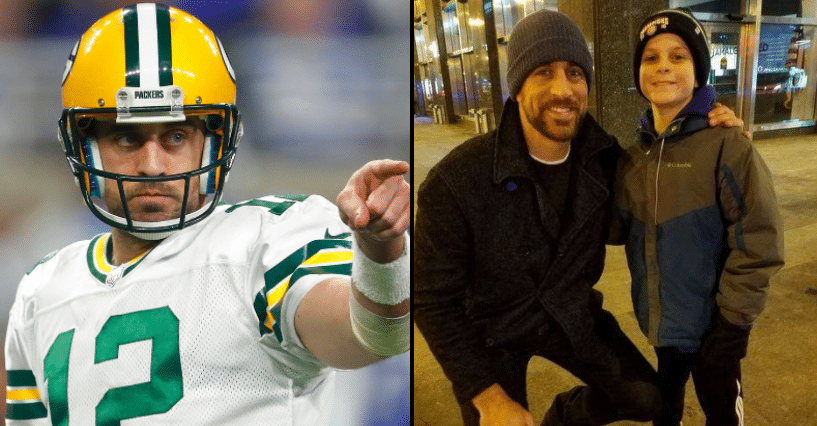 I haven’t met any celebrities personally, but I know folks who have and, for the most part, they comment on how ordinary they are. Their names may be known by millions, but they were friendly, likable, and very, well, normal.

While some celebrities may choose to hide behind large glasses or other disguises of their creation, many don’t mind meeting fans on the street, taking selfies, or signing autographs.

This past weekend in downtown Chicago, Julia Nicoll and her 11-year-old son, Peter, spotted Green Bay Packers NFL quarterback Aaron Rogers. Rogers was standing at the corner waiting to cross the same street as them.

At first, Julia wasn’t certain she was actually seeing Rogers. She wouldn’t have even noticed him if it hadn’t been for her son.

“I’m whispering to him like (in a doubting tone), ‘Really? I don’t think Aaron Rodgers is standing right next to us on the corner on a Saturday evening.’”

Julia checked, surreptitiously glancing to the side, and realized that the man was indeed Rogers.

The mother surprised herself when she struck up a conversation with the famous athlete. She didn’t want to bother Rogers while he was out in public, but she also knew she couldn’t pass up the opportunity.

She leaned forward and whispered, “Are you…?” (She had the grace not to finish her inquiry and alert any other bystanders to Roger’s presence.)

The NFL star didn’t hesitate: “He looked right at me and said, ‘I am.’”

Julia had no time to compose herself before Rogers turned around and introduced himself to her and Peter. The quarterback told the pair he was out enjoying the fresh air before his dinner reservation. He talked about his collarbone injury and asked Peter several questions about sports.

Peter reveled in meeting the star athlete and apologized for being a Bears fan, but Rogers gracefully conceded that he should be a fan of the team because he lives in Chicago.

Soon after, a group of fans approached and asked the star for pictures. Believing their moment with Rogers was over, the mother and son excused themselves, thinking they had a great story to tell when they got home.

Little did they know that the story was about to get even better!

Julia and Peter were shocked when Rogers soon caught up with them to continue their conversation.

“He just started talking to us again like we were all neighbors and friends,” Julia said. “We walked with him again for the next 15 minutes, 20 minutes to Michigan Avenue.”

“He was asking me questions that most people would think, ‘Why would Aaron Rodgers care?’” she continued. “It was so amazing. It was something, I have to say. It still is.

“I told so many people. We just couldn’t believe it, my son and I.”

Later that evening, Julia and Peter headed to Macy’s department store to admire the display of Christmas lights. While there, they noticed a woman decked out in Packer’s gear. Julia knew she had to share their experience of meeting Aaron Rogers.

But the woman didn’t seem quite as impressed as others had been.

“She kind of patted my arm in a sweet, sweet way and she goes, ‘Oh, my son plays for the Packers,’” Julia recalled, still in disbelief.

The woman’s son is Ty Montgomery, the running back for the Packers!

After such a surprising and eventful evening, Julia knew she had to share her story with the world.

“I’m sharing with the world what a fabulous human being Aaron Rogers is,” she said.

Were you surprised that this famous athlete would take the time to talk with Julia and Peter? So share this!