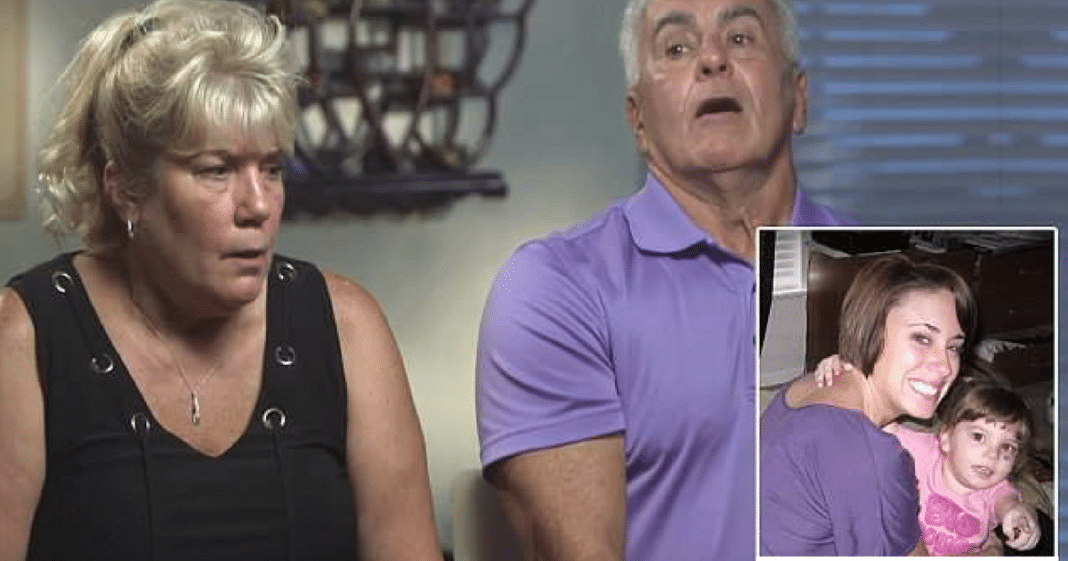 It’s been almost ten years since the disappearance and death of 2-year-old Caylee Anthony. Caylee’s mother, Casey was arrested for her daughter’s murder but was later found not guilty. An outraged and disgusted public responded to the jury’s decision with anger. Casey went into hiding after receiving death threats.

Caylee’s grandparents, George and Cindy Anthony gave an interview with Elizabeth Vargas for the A&E special Casey Anthony’s Parents Speak. The two don’t hold back; they often disagree during the conversation. But Vargas, who has now been ousted from ABC’s 2020, cut through all their crap and conflict and got down to the heart of the matter.

Cindy reported Caylee missing on July 15, 2008, 31 days after she’d last seen her. George was in tears within five minutes of the 2-hour interview when he started to discuss Caylee’s death. Cindy admitted she was tired of people seeing them as ‘the Anthony who raised Casey, a monster.’

Vargas asked if either of them noticed any signs that Caylee might’ve been in danger. This is one part of the special where Cindy and George don’t agree. Cindy says she had no indication at the time. George told a completely different story.

‘Part of me wishes I would have seen signs, especially in the last six months,’ stated Cindy.

‘Casey was good at covering her tracks, which we found out later. There were subtle signs looking back now Casey, but I didn’t realize it in the middle of it.’

George recounted a story that he’s told before about going to see Casey at a Sports Authority where she worked; in the end, she didn’t have a job at all. Vargas then asked if they ever confronted Casey about this job. George did to which Vargas asked how she responded to being called out for lying.

‘That it’s none of my business,’ said George.

Much of the interview was tense between George and his wife. At one point, the grandfather revealed other signs of what he considered to be troublesome; he’d return home from work in the afternoon or early morning to find his granddaughter and daughter weren’t there. George stated that Caylee would be missing for two to three days to which Cindy would vehemently deny that she wouldn’t ever stay elsewhere. ‘Most times, but a few times she wasn’t,’ said George.

‘Because that was a night she was supposedly going to spend a night with the nanny or one of her friends.’

This nanny, a woman named Zanny was created by Casey. She alleged Zanny was the last person to see Caylee before she disappeared. Or the presumed kidnapper.

Cindy mentioned how anxious she was to do this interview. At this point, she became flustered as she said: ‘George, as far as Caylee goes, I know when that child was not here.’

George keeps his cool throughout the discussion. He doesn’t disagree with Cindy but finds it alarming that when Caylee wasn’t around, she and her mother would be gone for days.

’Not at that time,’ said Cindy.

‘About six months before we saw a couple of different times where she’d be gone for a couple of days,’  said George.

‘Casey and Caylee did not stay out for two or three days; I know that for a fact. Caylee was always  here.’

George has previously said that he believes Casey played a part in Caylee’s disappearance and death. He doesn’t want to ever see his daughter again.

So it wasn’t a shock to the astute viewer when Vargas shot Cindy an incredulous look as she asked, ‘So Caylee never spent the night somewhere else?’

That forced Cindy to pause a moment before replying: ‘Maybe one or two times, cause I wouldn’t go to bed unless I knew Caylee was tucked in.’

Meanwhile, George is seen staring off into space. He is struggling with whether to keep quiet to avoid hurting his wife or to tell his version of the story. ‘Listen I don’t want to get upset with you, I don’t want to upset anyone anymore but I just know what I witnessed…,’ said George.

George Anthony theorized that Casey had given Caylee “something to make her sleep,” which ultimately caused her death.

Cindy continued to deny his claims. Here’s where Vargas shines. she simply says to the tortured grandfather: ‘You feel differently, don’t you, George.’

Unlike Cindy who couldn’t specifically give examples of how things were changing before Caylee’s death, George talked about how items went missing from their home. He was blamed for taking his wife’s wallet. At that time, he was struggling with a gambling addiction. Understandably, Cindy thought the thief was her husband. George believed Casey was responsible. He backed up his claim, saying that Casey stole money from a savings account they set up for their granddaughter.

Cindy was quick to defend their daughter once more, saying: ‘But George, Casey learned by example.

Thanks to Vargas, the Anthony’s are being forced to address the reality of their situation, even if it is ten years later.

’You lied to me for several years, and that’s where our daughter got it,’  said Cindy as she walked out of frame during the break called by Vargas.

This isn’t the first time George showed a lack of awareness during the interview. Earlier in the special, Vargas wondered who fathered Caylee. He didn’t know. He didn’t even ask his daughter. ‘I was so excited, I didn’t really bombard her with any questions,’ said the former police officer.

The Anthonys home is in foreclosure; it’s clear George believes his daughter had something to do with Caylee’s disappearance. Cindy, on the other hand, isn’t as certain. She’s seen Casey a few times over the years. This family was ripped apart by the death of this sweet innocent little girl. Her grandparents now seem estranged and at odds with each other. Conflicted about their own daughter even.

If we can take anything away from this special, let it be that keeping tabs on your children, even if they’re adults is crucial. Talk about things even if your words might hurt someone else. Most importantly, if there’s a child involved, and you don’t believe they’re safe, speak up.