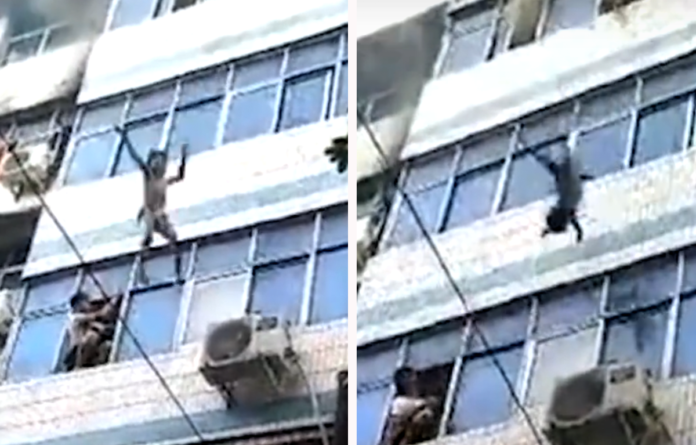 A mother from the Henan Province in eastern China saved the lives of her 3-year-old daughter and 9-year-old son. The family’s fourth-floor apartment was overtaken in smoke and flames and she had only seconds to throw her children to the ground below, where onlookers had gathered a mound of bedding to cushion their fall.

Harrowing video (see below) shows the mother peek out the window to the ground below, then make the life-or-death call. As thick brown smoke billowed from the window, she used her last breaths to get them to safety.

First, the desperate mom threw some bedding of her own to the ground below as the crowd on the ground worked to form their own pile amid loud screams.

Then she dropped her 9-year-old son, who plummeted flailing at a shocking rate of speed to the ground.

Next, the mother dropped her 3-year-old daughter from the window head-first. It’s a terrifying sight as the girl flips in the air on the way down. An onlooker still inside the burning building watches helplessly from a 2nd-story window.

Both children survived the fall.

Finally, the mother collapses from smoke inhalation in the window frame. She later falls back into the burning building, where firefighters would find her beneath the window. Sadly, she passes away at the hospital.

The mother summoned her last strength to save her children, but smoke inhalation quickly overtook her.

It’s similar to a story we’ve shared about Shelby Carter, a young mother from a town called Wyoming, Illinois. Shelby used her last breaths to save her newborn 12-day-old baby, throwing her in a car seat from the window of her burning home. It’s thought that carbon monoxide and smoke inhalation prevented her from jumping from the window herself.

Both of these mothers gave their lives to save their children with only seconds to act.

It’s a reminder that smoke inhalation can be deadly in seconds. Up to 80 percent of all fire-related mortality is brought on by carbon monoxide poisoning during fires.